Thursday 29th November was the night. The NSMBA’s Annual General Meeting took place at Jaycee House, North Vancouver. Our intention this year was to join our AGM and our end-of-season party together; seeing as our AGMs are already social affairs, it made sense to crank out the powerpoint slides and the tunes on the same night!

With that said, we were extremely impressed with the turnout for this year’s AGM with well over 80 people in attendance, all eager to hear of the past year’s progress and learn about next year’s plans. We would also be voting in our new directors to the board – but more on that later.

As is standard these days, the evening got underway with a brief intro from our President Mathew Bond, who finds himself back at the AGM for a 5th year in a row as President. A huge thank you to him for his years of service and we are all delighted he has agreed to stay at the helm for another (at least!). 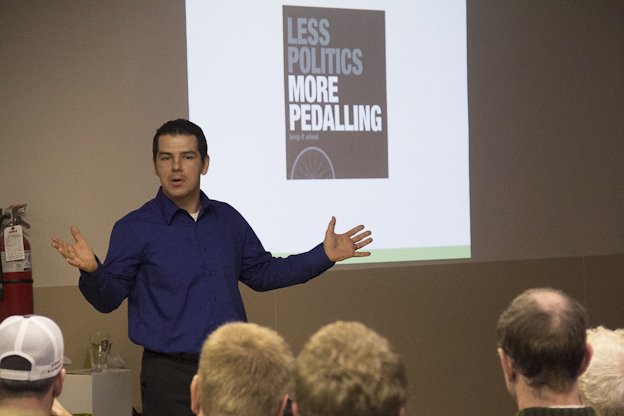 Unfortunately not all members of the board were continuing their involvement in 2013 – members of our board who have served for three years and feel the time is right to focus on other things away from monthly board meetings, Google docs and reply-alls! 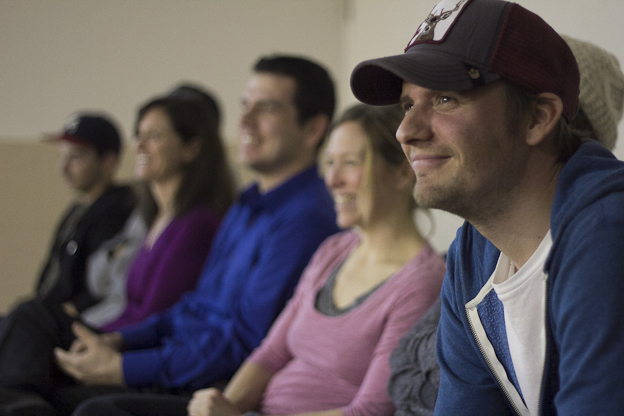 A particularly big thank you to Tim Ambler and Adam Walsh who have both served for three years during a period of transition for the NSMBA, as well as Earl Allen, Rhonna Gurevich, Aimee Dunn, Andrew Hewitson and Ilana Wapniarski.

After an overview of the evening’s events, we moved along to hear from the current board of directors who presented several slides for their respective departments. First up was Treasurer Tim Ambler, who has taken care of all monetary duties in a year which has seen a significant amount of money in and money out thanks to the hugely successful Trail Adoption Plan (TAP) and the hire of a Program Manager. After several slides of columns and rows, the good news is that we are in a very healthy state, and move into 2013 in a stable financial position. 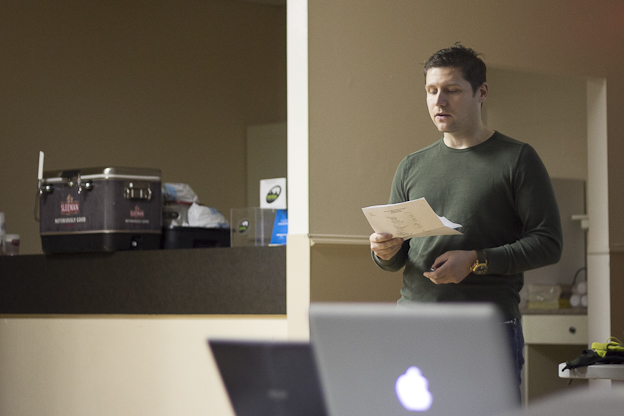 Membership duties this year were headed up by Aimee Dunn, who did a fantastic job of addressing dwindling numbers and helped to steer the ship back on course by almost doubling paid memberships for the year. This is one of the most crucial roles within our organization and with the help of Rhonna towards the end of the year, we know that membership numbers will continue to improve moving forward. Thanks girls, and congratulations to Aimee for the arrival of the newest member of the Dunn clan!

Next up was Tara Mowat, who has been managing our events for 2012, and has done a great job in ensuring we all let our hair down throughout the year. The highlight event was the 2012 NSMBA Film Festival, which in its second year saw a huge increase in both entries and the quality of submissions, with the local amateur filmmakers giving the pros a run for their money! Next year will undoubtedly be another huge success and we look forward to releasing details of an exciting new twist for next year’s participants – watch this space. 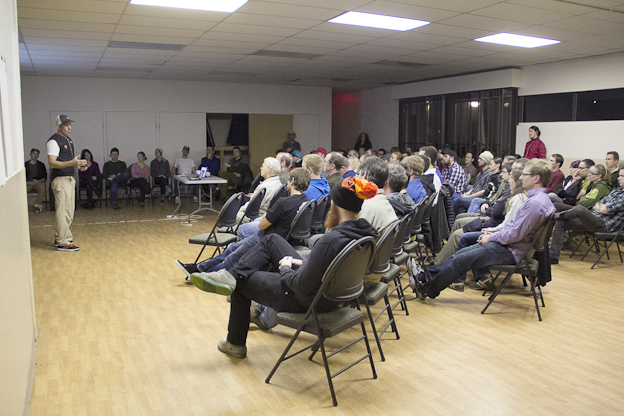 Marketing was next and with some staggering successful initiatives underway, spreading the good word becomes an easier task. Through a combination of social media, printed materials and newsletters we have been able to keep most of you informed of all our events, however we know that there is still more work to be done to ensure that everybody receives regular and prompt updates to our numerous events. A huge thank you to Contact Printing for always ensuring our printed materials are produced on time and look so good – these guys rock! We would also like to thank Cam McRae and the crew at NSMB.com for continuing to support our efforts in the wide world of mountain bike media.

Two missing directors from the board of 2012 this evening were Ilana and Andrew. These two have both thrown themselves headfirst into the world of business ownership and have been working 25-hour days (!) to ensure that their new venture is a success. Before they departed they were both instrumental in the success of the revived Toonie series with Ilana driving the format, red tape proceedings and Andrew working alongside to ensure that these were well funded through sponsorship dollars and great swag from local businesses. Thank you to the both of you for all your efforts, and while you’ll be missed next year, we wish you all the best with ‘Adelines’ on Commercial. 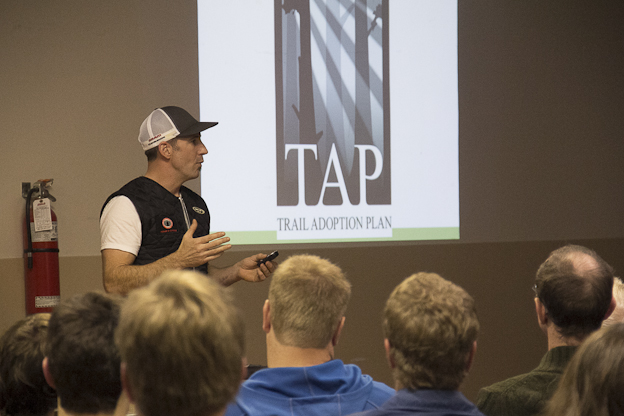 With the incredible success of TAP in 2011, the management of the expanded program for 2012 necessitated concerted attention. For the first time in our history we had a paid member of staff in the form of a Program Manager. Mark Wood needs no introduction for most and many of you have met, worked or ridden with Mark as he develops the TAP, our North Shore Trail Builders Academy in association with Arc’teryx, as well as The Watchmen program – to name but a few of the initiatives devised and executed by our new Program Manager. Mark took the powerpoint clicker in hand – as he has done time and time again this year, be it in front of trail builders, neighbouring advocacy groups, council members and land owners – and doled out a great recap of his year. With enthusiasm, which seemingly cannot be quashed, Mark brought us up to date on the past years events and programs and spoke of how the future of the North Shore is bright. In fact, the Shore has never looked so good – well not for at least a decade.

It goes without saying that none of the programs currently run by the NSMBA could exist without the generous support of all our sponsors, adopters and trail builders. All you guys and girls are incredible and through all of your financial contributions and physical man hours – you have helped restore many of the North Shore’s trails to their former glory. Thank you! 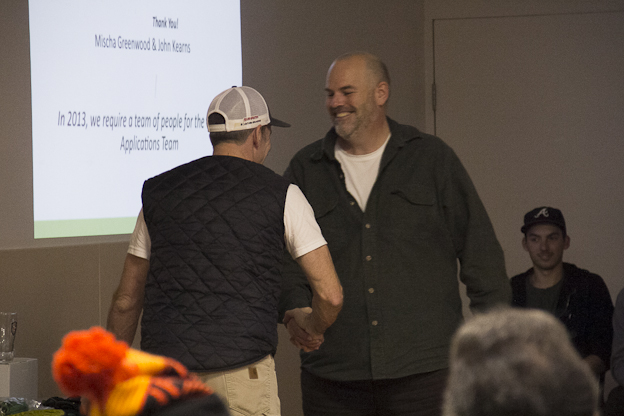 After a comprehensive insight into the Program Manager’s role and all the positive news that comes with Mark’s efforts, we moved to the elections for new board members. With a large number of seats available, it was exciting to see new (and not-so-new) faces stepping up to the plate. We even found ourselves with competition for certain roles – such is the demand to be involved at this level – so we thank all you in advance for volunteering your time to the cause. 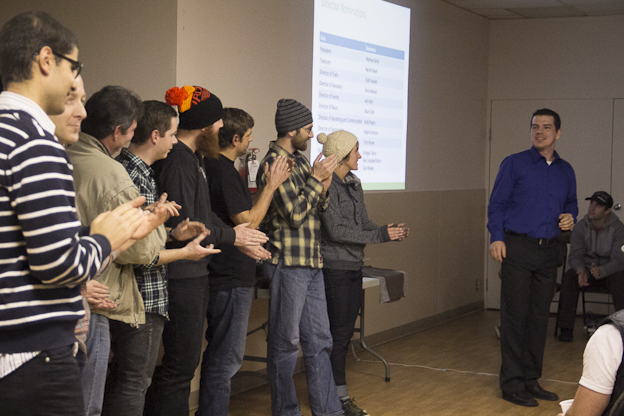 It all ended amicably with a newly elected board, smiles all round and an excitement in the air for all concerned to get stuck into some hard work. Here are our new board of directors and we know that this new team will help keep the flame lit and moving forward through 2013. 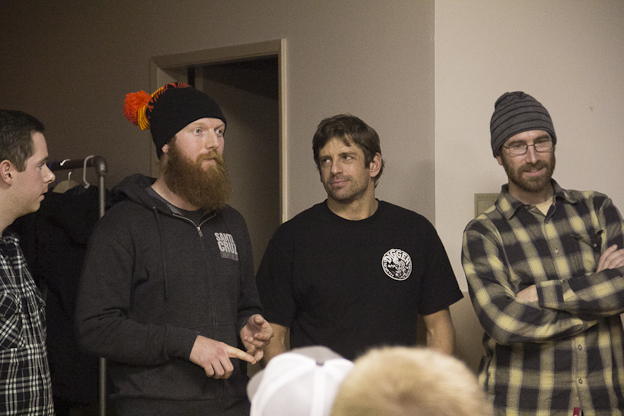 Our new board of directors are: 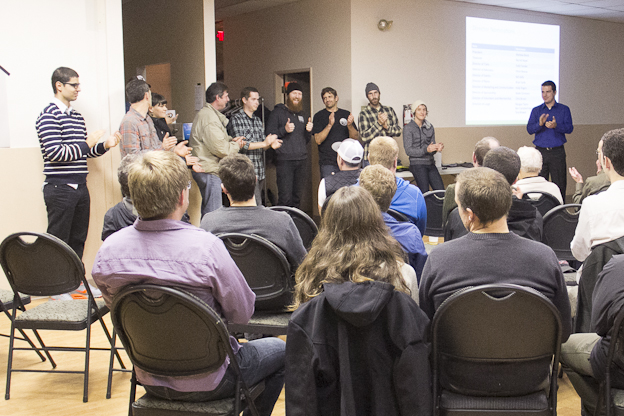 Our next update was from one of the hardest working and committed unsung heroes of mountain bike advocacy – Alan Bardsley. Alan has been working closely with the land managers of Cypress Mountain for many years and with all the rumours and speculation surrounding the trails on this mountain, he was able to bring us up to speed with regards to proposed plans, public hearings, master plans and the future of the much loved trails on Cypress. In February, Alan put out the word asking the mountain biking community to attend a District of West Vancouver open house and was happy to report that the community’s support was noticed by the land managers. We will, of course, keep you informed of any progress regarding Cypress. A huge thank you to Alan, who for six years or so, has been flying the flag for mountain bikers on Cypress. Your work is much appreciated.

With all formalities out the way, it was time for the real fun to begin. With everybody feeling pumped and proud of the last 12 months of work and with excitement for the coming year, it was time to let our hair down. With liquid refreshment supplied by Okanagan Springs, it was time to ditch the Powerpoint slides and crank the iPod playlist! 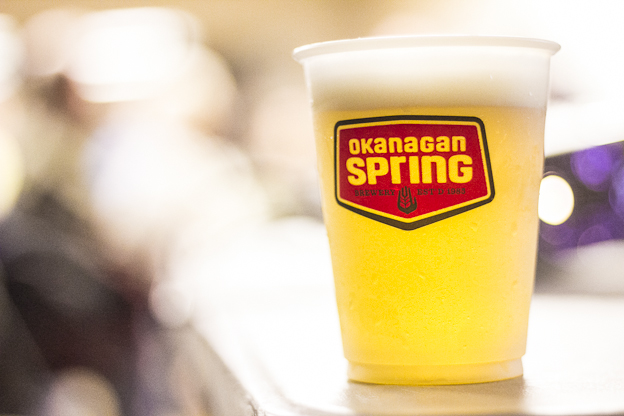 Beer flowed, as did the conversation. Whether people were meeting for the first time or the hundredth time you could not tell. The only thing that was obvious was the passion for the sport we all love and celebrating the position we find ourselves in: as one of the most progressive and innovative trail advocacy organizations on the planet!