Sunday September 11th brought the fourth and final trail day on Boogieman for the 2011 season. Backed by Steed Cycles and Giant Bicycle Canada, local builder Sean Gerke took on the task of maintaining Boogieman through the NSMBA Trail Adoption Program, and has since hosted four trail days mostly oriented around repairing structures which are on the verge of failing. This trail day’s goal was to replace two bridges after the swamp log which were beginning to rot, not to mention they were bad news in the wet.

This trail day started as most others, treats and coffee at Bean Around the World in Parkgate Mall as we assembled our team of volunteers. This trail day had a turn out of four volunteers in addition to Sean, they include Shawn, Jeff, Josh and myself. Once we had satisfied our caffeine dependency, Sean dropped Josh off at the Mushroom lot to close the trail, and upon his return we gathered our tools and headed up the mountain.
Once all the formalities were out of the way we got to work, well at least Sean did. Before we could dive into building the new bridges the old ones were swiftly dispatched by Sean and his friend the Stihl chainsaw. 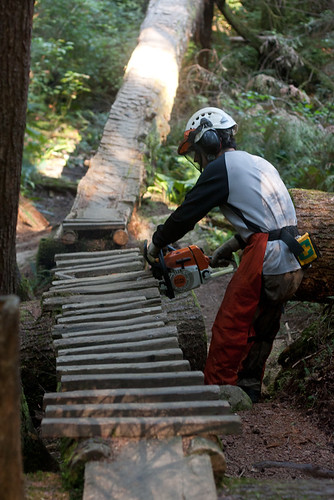 After hiding the carnage, the arduous task of bringing in materials began. We had to move 2 stringers, 2 small footing, 1 very long milled log and countless rungs.

After a good break we were ready to get right back to it. We installed the footings for the milled log by digging holes, then filling them with small rocks and ‘gold’. 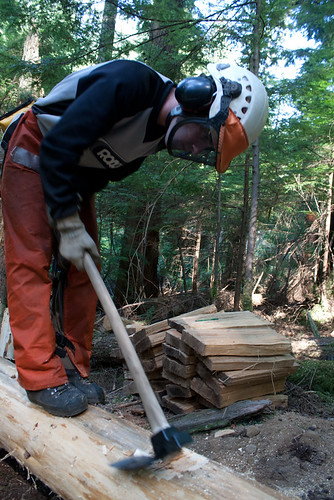 After the majority of the grunt work was done on the log, we concentrated on the ladder bridge which would serve as the exit to the swamp log.
A big shout out to Steed Cycles, Giant Canada and the volunteers who have made these trail days possible, as well as a big thank you to Sean Gerke who bravely took on Boogieman this season, and will keep chipping away at it for many more seasons!
If you want to see the full set of photos from the trail day, head on over to Flickr!
-Conor Coen