Celebration on Fromme on June 23rd – Ladies Only 20th Anniversary

On June 23rd, we gathered in the sunshine at the water towers on Fromme to celebrate the 20th year anniversary of Ladies Only.  Nearly 100 riders gathered to pay homage to the first free ride trail that started it all way back in ’92, built by the burly Digger, Todd Fiander.

Someone was bound to go in the drink! photo Scott Robarts

Read the rest of the story and check out the photos…

On the eve of June 22nd, the heavens opened up, pouring rain all night, threatening to waylay the celebration happening the next day.  Miraculously, on the morning of the 23rd, the sun broke through the clouds, basking the mountain in sun.  Climbing above the 4th switchback, a thick mist rose from the forest.  It was a perfect day on the Shore. 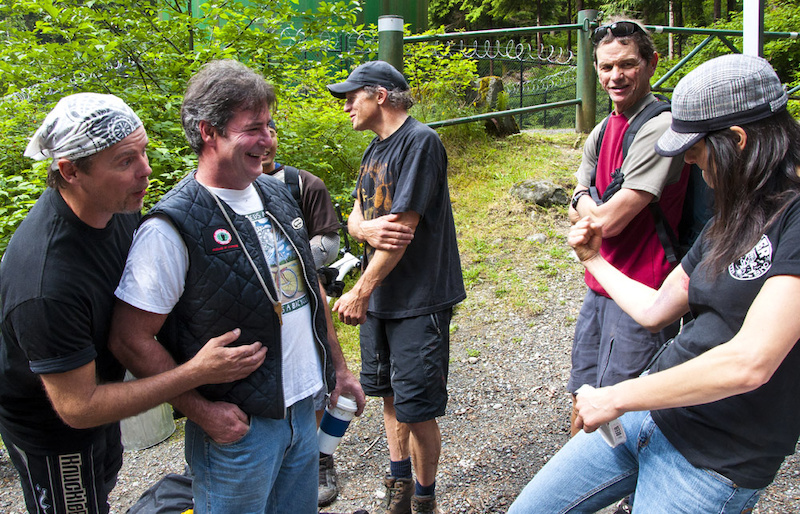 Many of the original Shore riders came out to take part in the festivities. Mountain Bike Mike, Chris Frampton, Millsy, Nigel Quarless (who designed the poster for the event), Freddy Z (despite being double casted!) & Cam ‘the Hammer’ Calder were on hand to show the ‘new schoolers’ they still have the skills to pay the bills!  Andrew Shandro came out to show his support.  “My first photo in bike mag was on the teeter, taken by Digger!”  Seems like only yesterday…Many welcome faces and good friends were on hand to join in the fray – Morgan (sadly without Denver) and Stephen Mathews from nsmb.com, Chris Barker & Steve Sheldon to name just a few.  Even Wade Simmons hiked into the teeter to watch the show, bringing little Elliot Simmons to bask in the spirit of mountain bike culture.

NSMBA President Mathew Bond led the group down the trail wearing a vintage Hoots jersey, 1995 Fox shorts and riding an early 90s DeKerf wishboner.  “I figured I’d wear what I wore my first time down the trail.”

“Who’s going in the drink?!” was the big question of the day.  The mob inevitably gathered round the teeter totter to watch the show and cheer on the riders as we tackled the log one by one.  Cowbells, rattles and chants of “In the drink!” by the rowdy crowd could be heard all the way back to the roadside.  Nearing the log, you could soon see it was pure anarchy.  It was standing room only and Digger stood at the top of the log, willing to coach first timers down the slippery chute to break their cherry.  “Go with your bike, let the log steer you, don’t force it, let it come…” words from the master.  Pat Podolski & Jeremy Tyler Lemay had been camped out in the blueberry bushes since 8:30 in the morning, primed and ready for the big show, rattlers in hand to cheer on the riders. 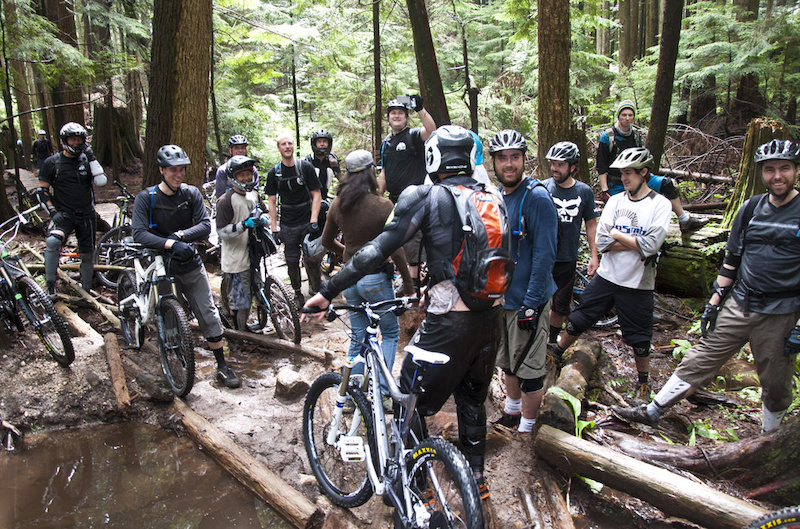 The Blueberry boys get their wish…photo Scott Robarts

One by one, the critical mass made its way across the teeter to safety, with not one single ‘fatality’.  An air of disappointment hung in the forest.  The crowd refused to disperse, wanting to see someone make the plunge.  Finally, along came Jeremy, donning full body armour and wearing a full face helmet…losing his front wheel off the log, he fought against the fall but fell in up to his neck!  KERPLUNK!  The crowd went wild as he hauled his bike out and laughed along with the crowd.  “It was my first time riding the trail, I figured what the heck, I’ll give it a try!”  With that, the mob made its way along the trail to savour the Big Stupid and the stump drop.  It was a stellar day on Fromme with plenty of reminiscing, high fives, big smiles and some good shredding.

Danielle made it across the teeter but caved under the crowd pressure and stumbled into the drink! photo Scott Robarts

The after party at the Narrows Pub had plenty of giveaways compliments of Okanagan Springs brewery who donated some of their delicious craft brews: 1516 & their Apricot Summer Weizen.  Digger was presented with a photo collage of the building of Monster, the mega coaster he re-built this year on Lower Ladies.  One of the highlights of the day was cutting the amazing cake made by Aimee Dunn (known & loved by all) under the supervision of Layne her husband who looked on like a proud father!  The cake was decorated with Digger on the mega coaster with tools and slats and ferns abounding.  Great work Aimee!  No one went hungry, as there were plenty of treats, including some delicious cupcakes from Jenny Breckon, Jerry Willow’s wife, who, despite being her birthday weekend, baked up some gluten free cupcakes from her newly opened bakery on Old Dollarton Highway, Sweet Tooth Cakery.  Be sure to try the red velvet cupcakes!

A big thanks to Okanagan Springs for supporting the event and keeping our whistles wet after the ride.  A big thanks as well to Luke at the Narrows Pub for taking us in last minute after the fateful call from the Lynn Valley Legion only days before the event informing us they weren’t able to host us.  There are many people to thank for making the day complete:  Johnny from On Top for printing tshirts, Leah Gantzer who was the hostess with the mostess and handled beer tickets, raffle tickets, tshirt sales and also put a smile on everyone’s face.  Thank you to Nigel Quarless for creating the amazing poster, Rich & Misha Greenwood for videoing the event (soon to be released), Scott Robarts for taking pictures (many more of Scott’s pictures here) along with Layne Dunn and of course, all of those who braved the greasy wood and made the day one to be remembered.

I knew it was a good day when Digger asked me at the end of the day “Are we doing this again next year?”

Scroll down for more pictures… 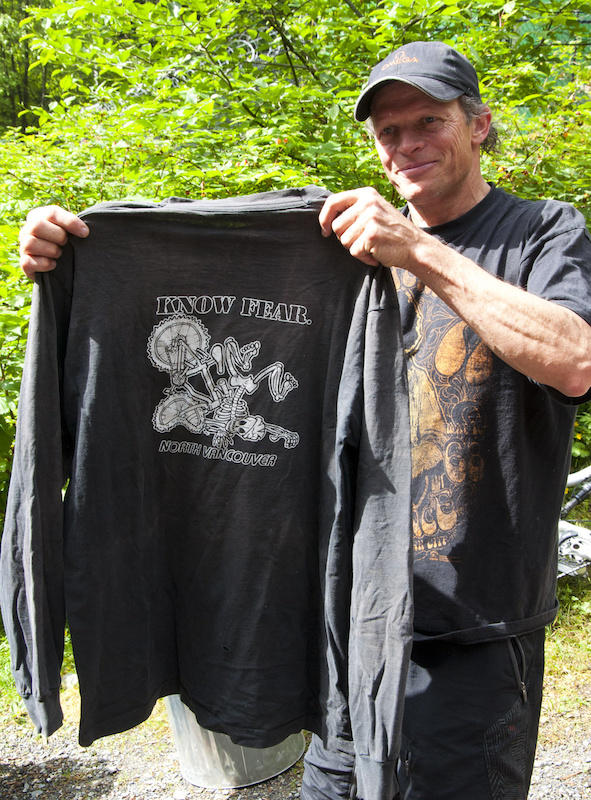 Frampton shows off a relic from the past. photo Scott Robarts 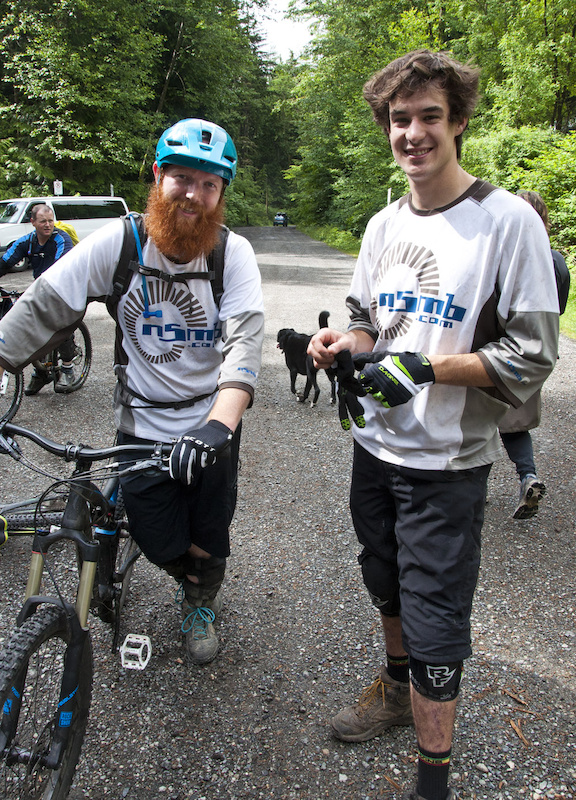