This summer has seen drought like conditions throughout much of BC and the coast is no exception. The lack of moisture means the dirt on trails is virtually irreparable until moisture returns. With present conditions, all TAP trail days are on hold until further notice.

As stewards of the trails, the NSMBA adheres to all Land Manager and provincial fire regulations in place. Power tools are not used in extreme fire risk conditions. We care for the forest and our trails.

As promised at the Town Hall meeting in April 2015, we are catching up on the ‘meat and potatoes’ work to realign and reconstitute trail beds, address erosion and improve sustainability.  Now it`s time for some dessert! In other words, rebuilding what put the Shore on the map in the first place. We launched TAP in 2011 and it has to be noted the hard work and efforts put forth by our Adopters and lead builders to get us where we are today.  Thank you to everyone who has played a part!

The NSMBA trail crew has been busy repairing structures and addressing issues on the trails as able given conditions.  Reclaimed wood from the Fromme parking lot has been utilized for decking to replace expired structures in need of upgrade. Without the ability to tackle dirt projects, much of the work has been focussed on woodwork over the past couple of months. “When the music changes, so must the dance.”

You will notice small fixes around the mountains but until moisture returns, berms won’t be patched until the wet season and trails will need to weather the dry conditions. If you see issues on the trails, please use www.trailforks.com to note and we’ll tackle asap. 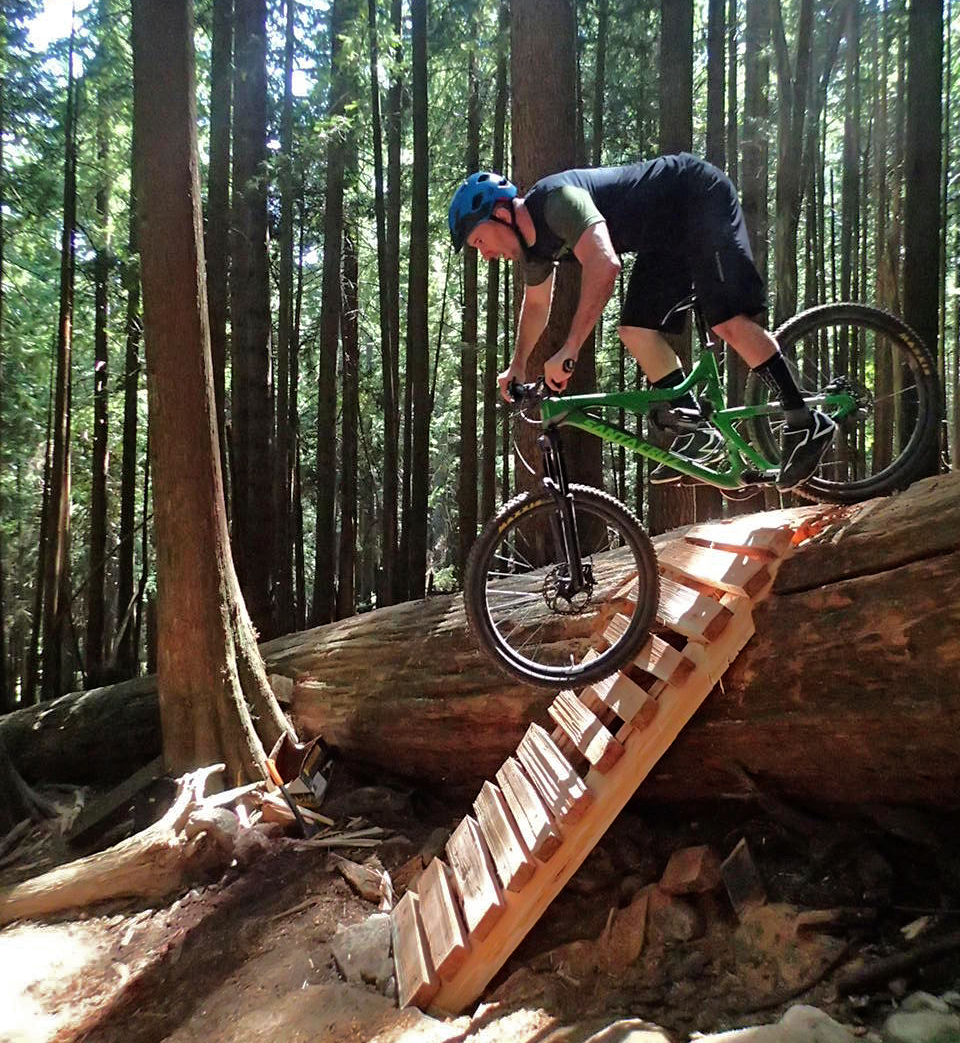 New rolldown on the Giant Log on 7th gives more black diamond options.
UOC
Thanks to the hard work from Dan Lui, Jorn Dettmer, Sean Gerke, student builder Lea Zhecheva, Mark Wood, Pat Podolski and Todd Fiander, we are proud to announce the replacement of most of the woodwork on Upper Oilcan.  With some modern incarnations in the rebuild, we hope that anyone looking for that old Shore feel will be able to find what they’re looking for. 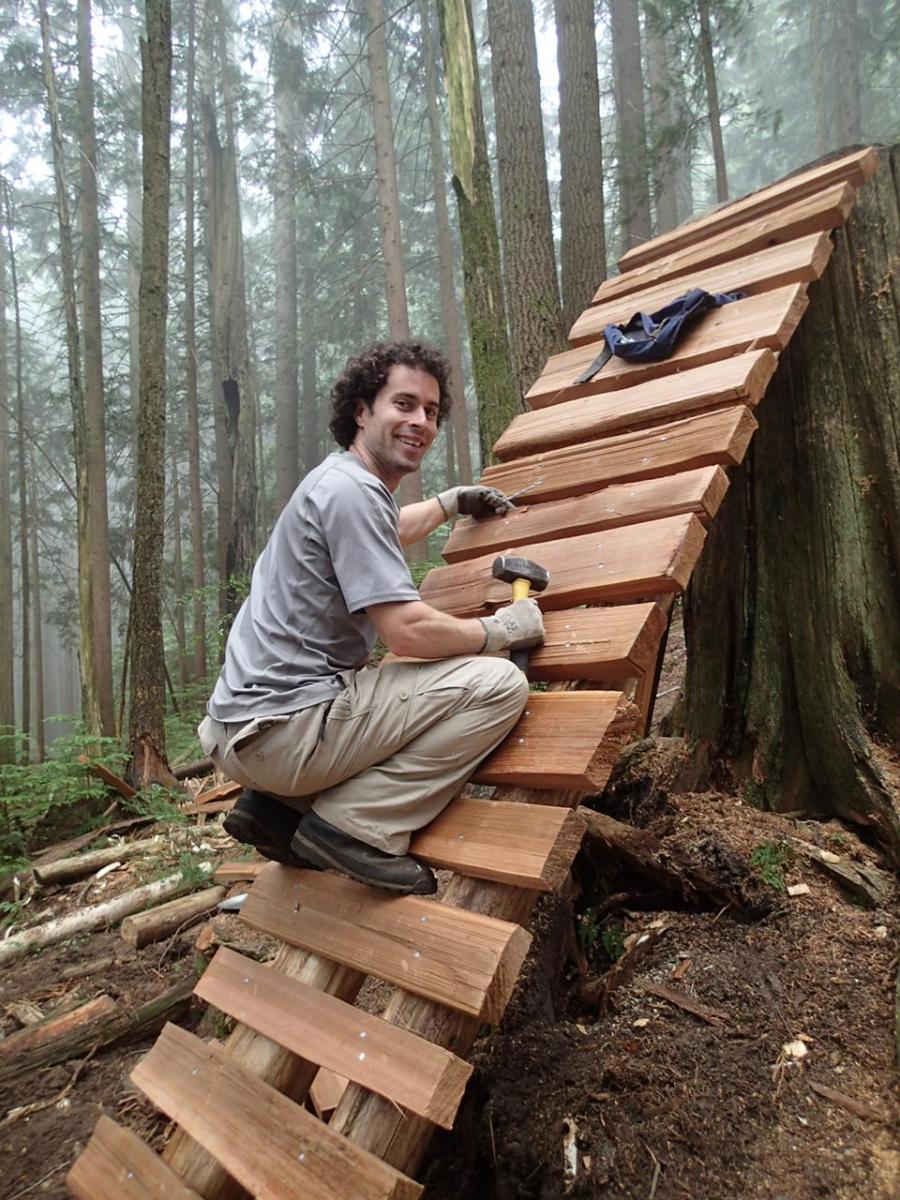 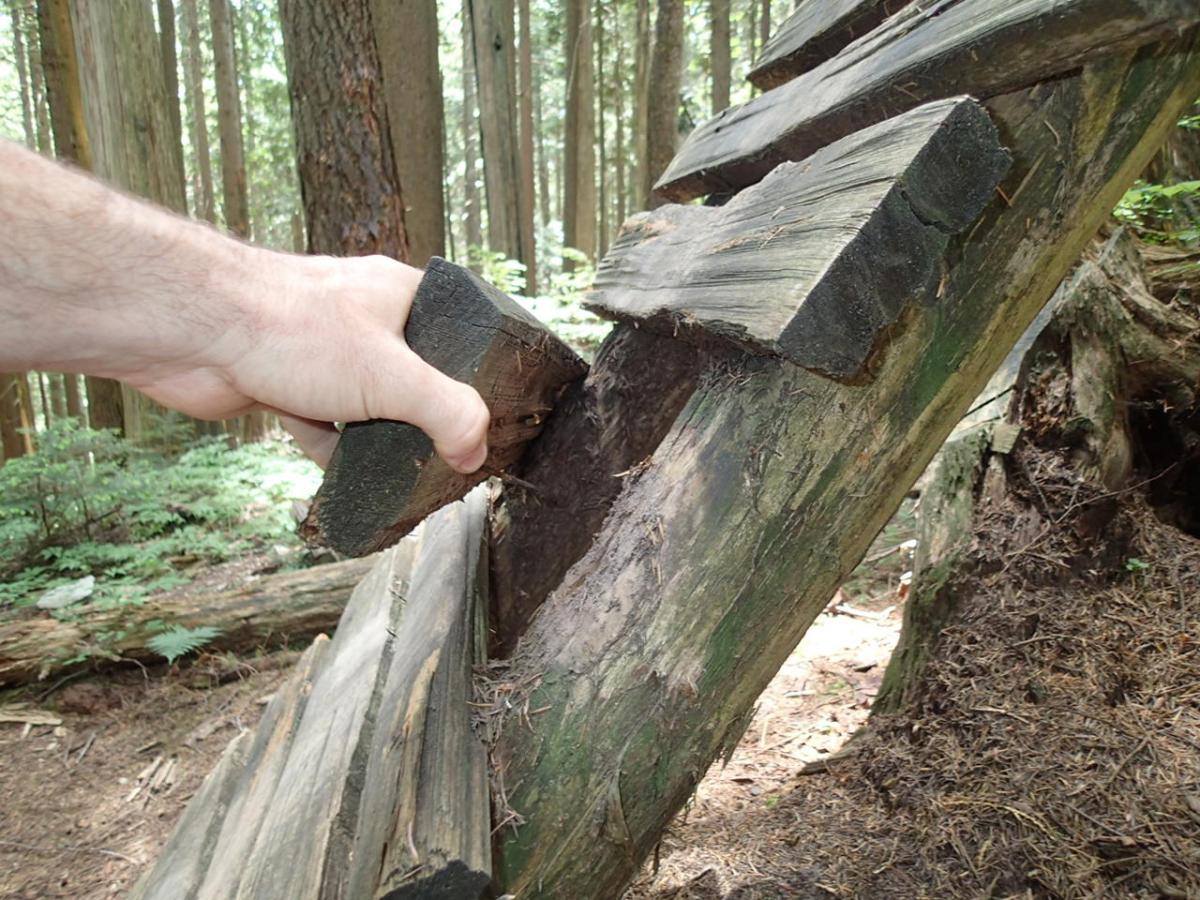 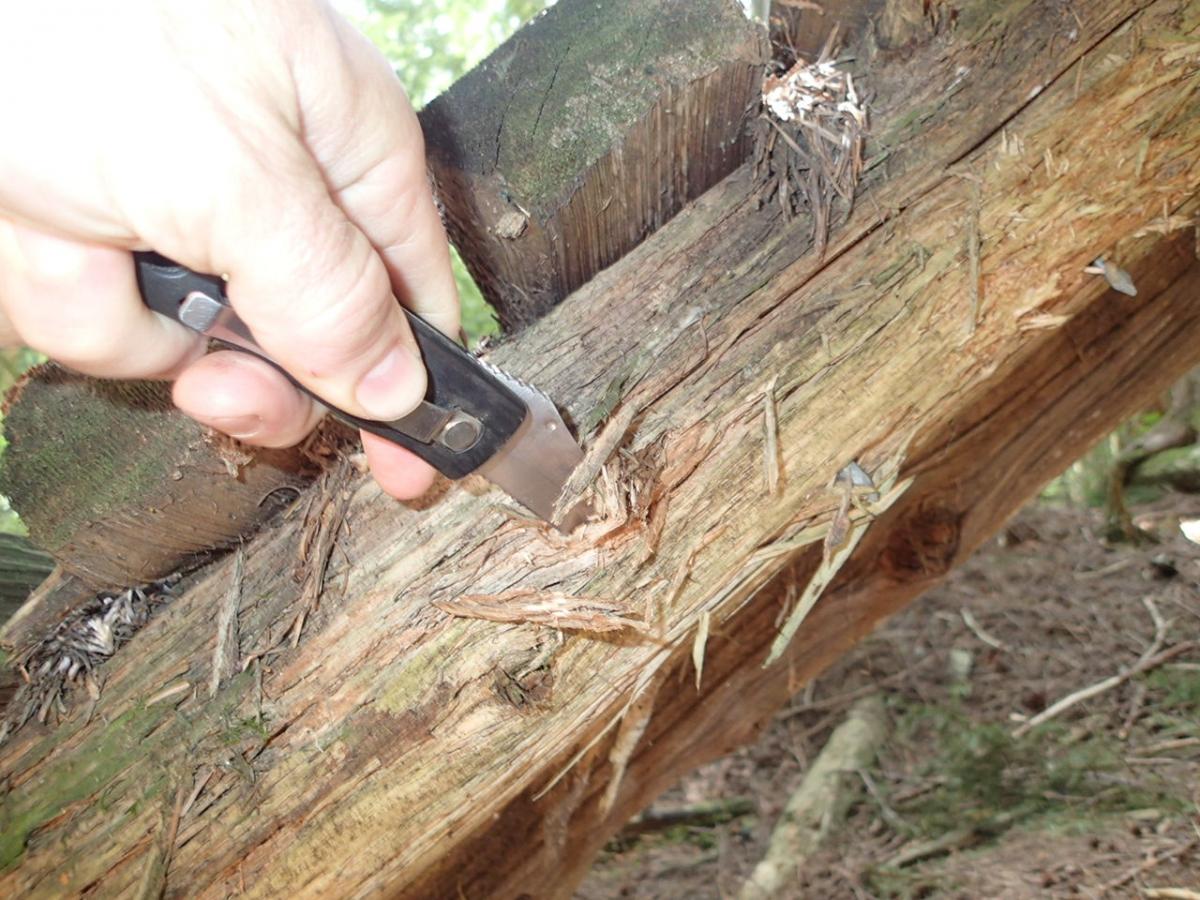 When slats can be peeled off by hand and you can sink a 4 inch blade into the stringers, it`s time for replacement. 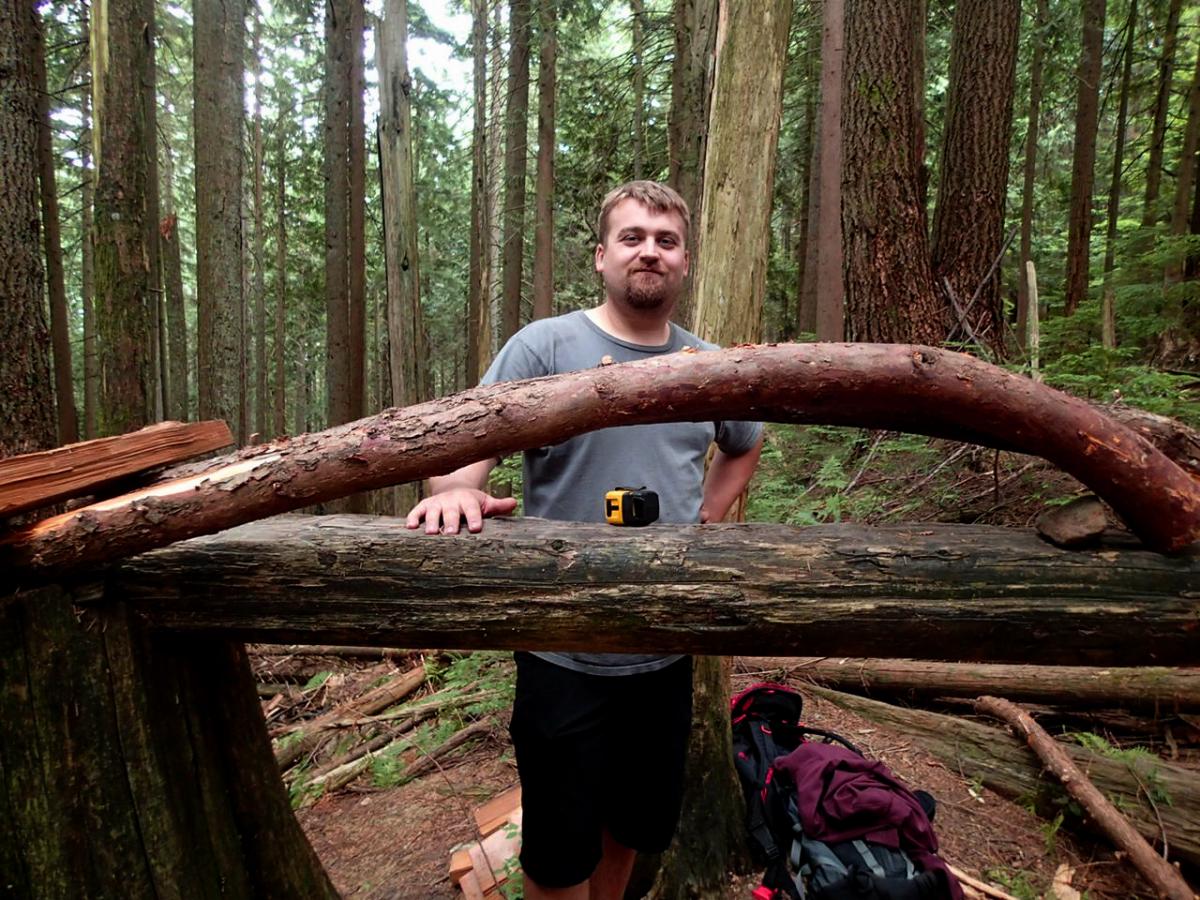 It's great to have Podo back in the saddle… 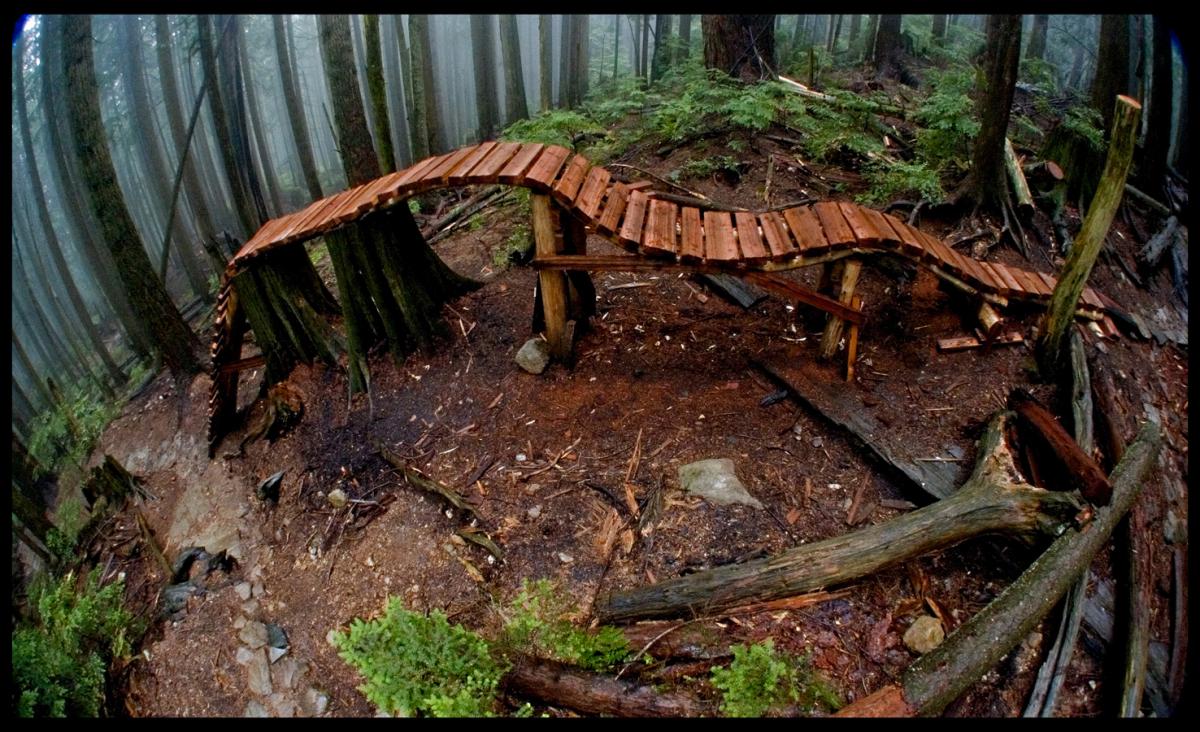 …because you get results like this. The Jenkosaurus Rex.

7th Secret
Led by Mark Wood, Sean Gerke and Lea Zhecheva, many improvements have taken place over the past couple of months including new entrances/exits to log rides, a new roll down on the 7th log and other minor repairs including the removal of torn lathing on the giant log (will be replaced with traction material prior to the wet season). We are proud to announce “the Gangler”.  A new incarnation of the old structure over the boulder that was removed 5 years ago due to expired condition. It is a new, optional feature that maintains the original integrity with a twist, now bringing riders to the lower section of trail. As an example of our cognisance of fire safety, the Gangler was built entirely using hand saws. Building on the great work by Ol’ Man Pete over the past two decades, 7th has returned to its former glory.  Look for the exit to the road from the Giant Log to be repaired in the coming weeks. 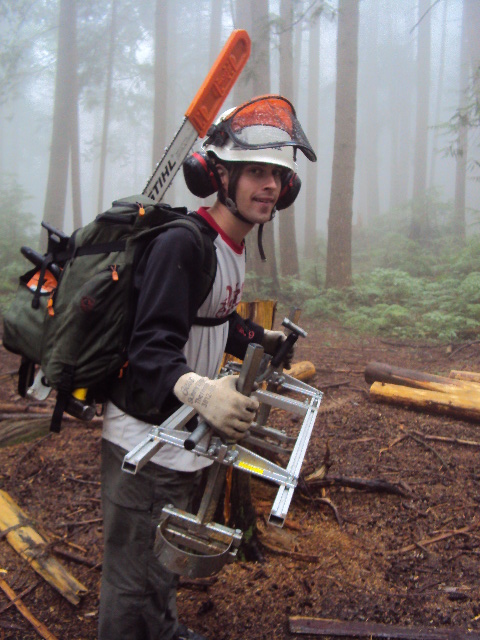 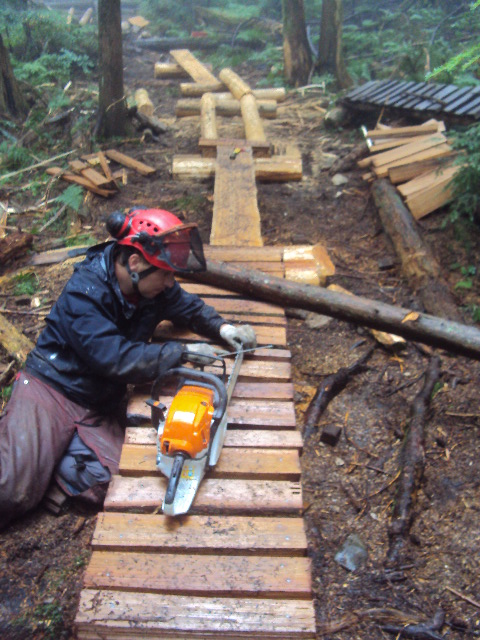 The work on 7th is a culmination of efforts building upon the foundation of Ol`Man Pete. Here are pics from 2011 when Gerke, Preston & Wood replaced over 70 feet of woodwork in the middle of the trail.  Complete with skinnies! 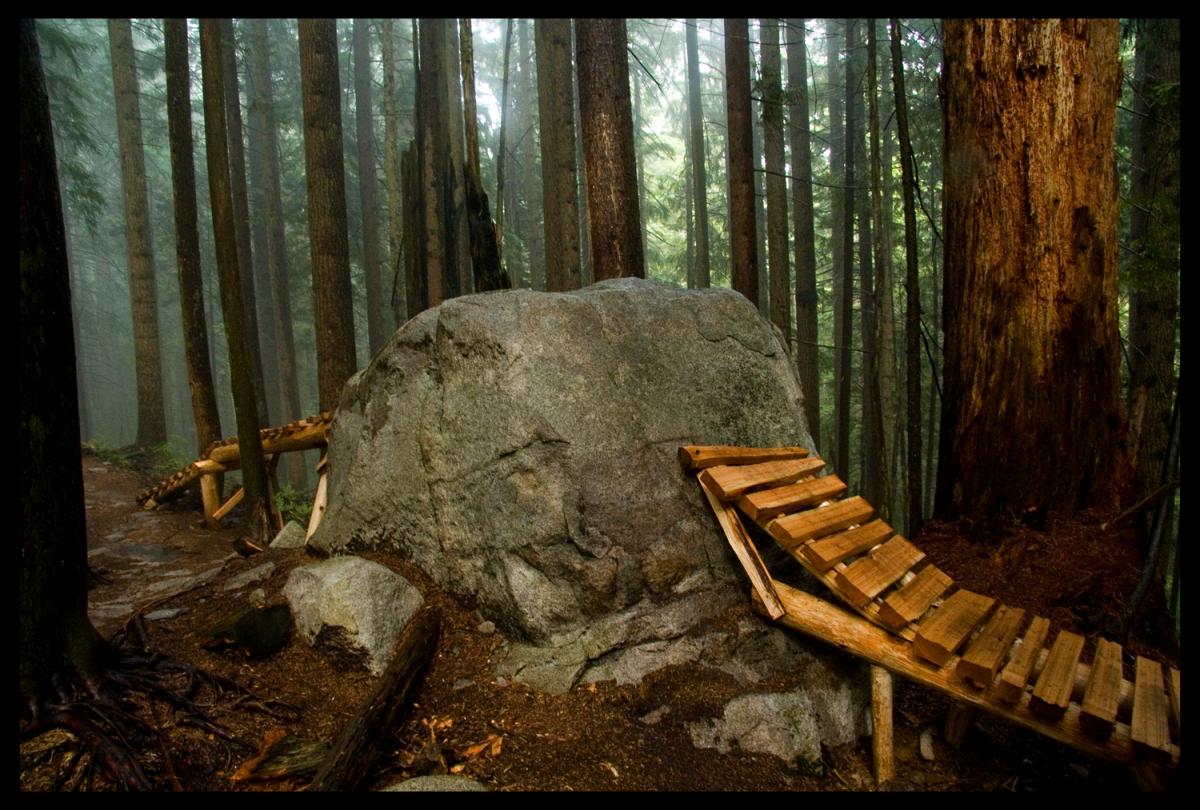 Pingu
Thanks to Tom Ferenc & Tom Hudson as build leaders under the TAP program to help with the additions on Pingu. Adopter the Raven Neighbourhood Pub has led improvements for the past couple seasons to create a new Pingu.  After the groundwork laid by Dunbar Cycles 2 seasons back to realign the entrance and add some berms, the drop has been recently rebuilt and several tables have been added including the addition of a little hip.  There are too many names to thank in the resurrection of this trail but contributions need to be noted from Pat Podolski, Lea Zhecheva and Mark Wood who even gave some blood to make that drop happen. 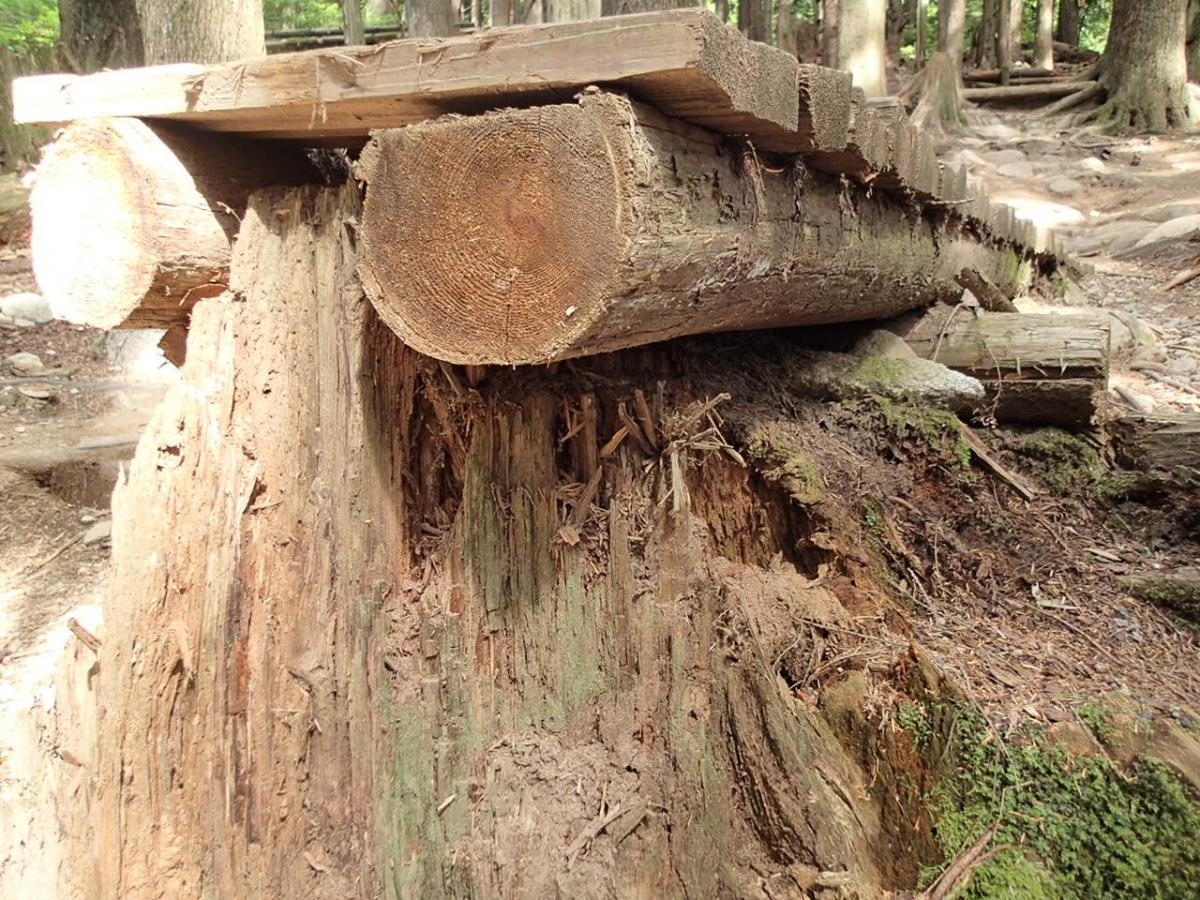 The old drop was balanced on a rotten stump. 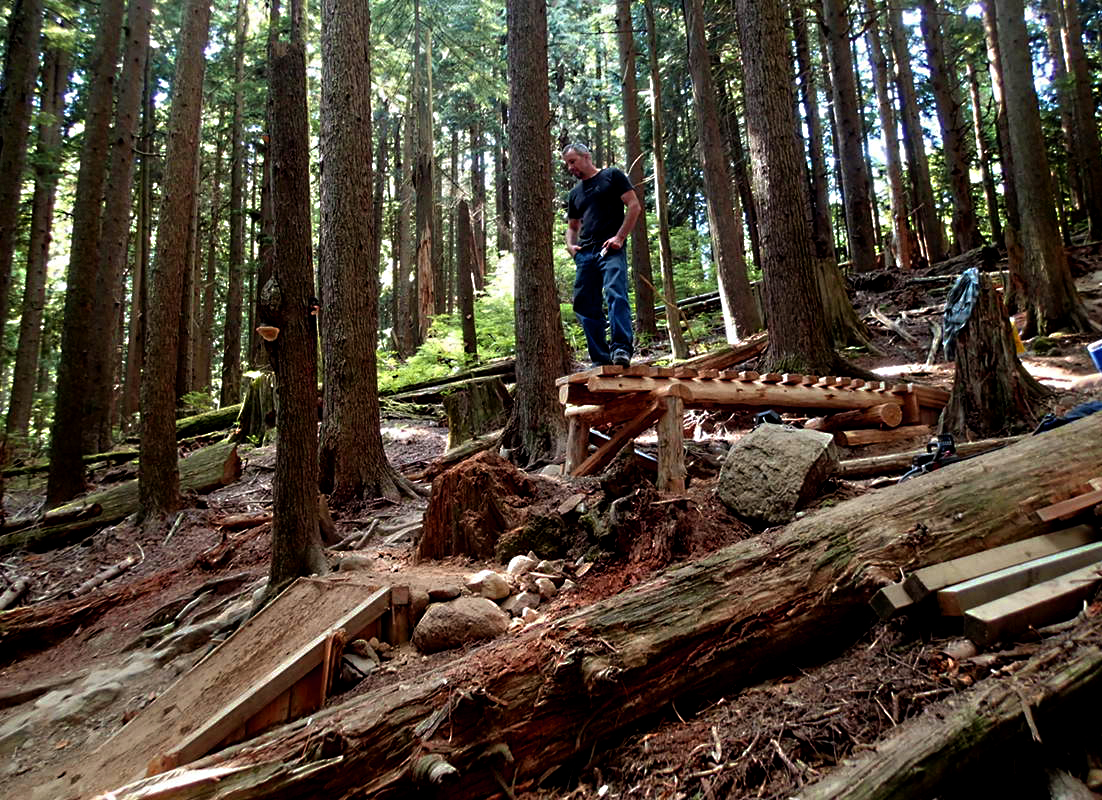 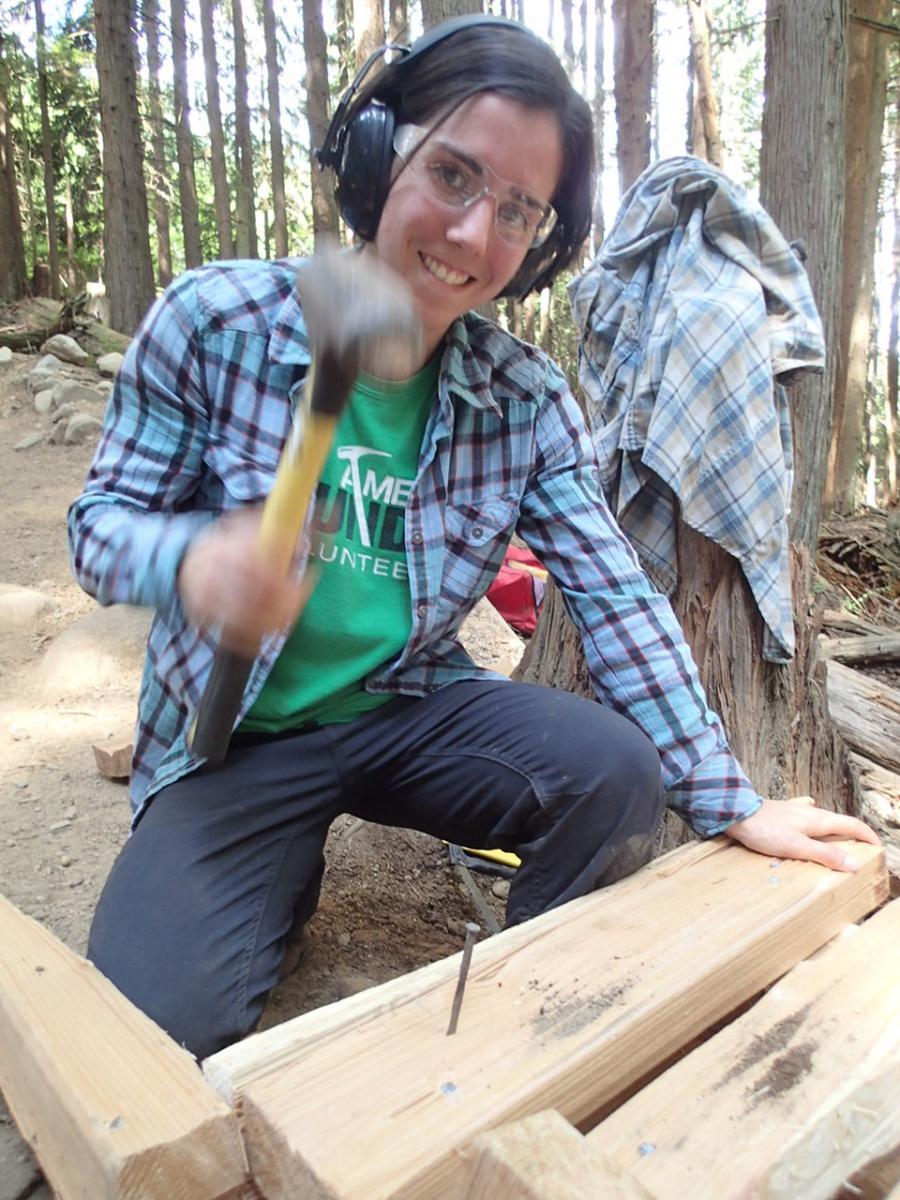 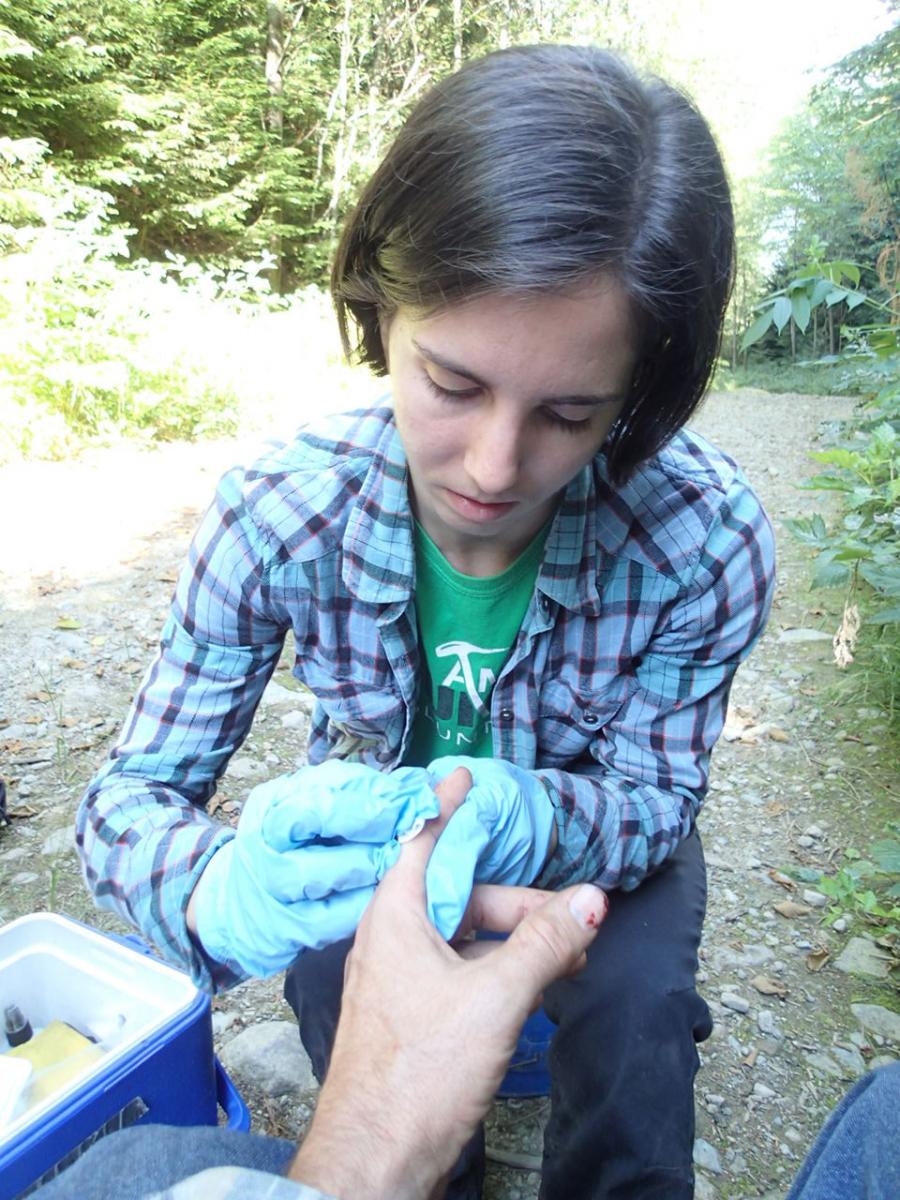 Lea has been a great addition to the team seen here getting last nail honours on the drop and bandaging Mark`s finger.  When using a bow saw, always cut away from you!

Ladies Only
You’ll see lots of wood being replaced on Ladies thanks to the solo efforts from Digger.  The log ride has been filled in and improvements will continue as the roller coaster after the log will soon be replaced.
Already, Digger has replaced the rolldown by the Egg rock and a new bridge after the log ride to replace the old rotted ghetto log.
Leppard
Thanks to Ol’ Man Pete and Pat Podolski, an expired bridge has been replaced. Pete has done some great work this year bringing this entire line back to life from 7th all the way through to Kirkford.

Pangor
Work is underway to replace expired woodwork and bring some old faves back into play including the log ride with a new entry.  The wood berms will be replaced over the coming few weeks plus a new entrance to the rock roll. Thanks to Sven Luebke for his leadership and TAP sponsor Acklands Grainger for making this work possible. It should be noted that Acklands Grainger donated $2000 in tools to the TAP program this year.

Crinkum Crankum
Ol`Man Pete has fixed what was previously known as `the worst corner on the Shore`, we hope you enjoy it.  It`s worth mention as a stand alone item…the old corner was that bad!  And you know the one we`re talking about…yes, that corner.  Look for new woodwork at the trail`s end just above Kirkford as it`s all due for a replacement.  Stand by…

Other News
Cambodia
In response to an email inquiry sent by the NSMBA, here is the response from Mike Mayers from Metro Vancouver;
“This unsanctioned trail has not been decommissioned. However, given public safety concerns and a recent serious accident on the trail, structures on the trail have been removed. We committed to working with the NSMBA on assessing the long term viability of a few trails in this area and plan on doing so later in the year.”
Any inquiries or comments can be sent to: LSCR@metrovancouver.org
Please cc: info@nsmba.ca
Hyannis
Metro will be resurfacing Hyannis the week of Aug 17.

Fromme Parking Lot
As suspected, the new Fromme Parking lot is seeing some high usage.  Please be considerate of others and be respectful of usage.  The NSMBA will be working with the DNV to determine appropriate closing times but don`t forget, all DNV parks are considered closed at dusk. There have been instances of vehicles travelling at high speed on the gravel road.  Please keep your speed down and adhere to the 20km per hour speed limit.

Proposals
The NSMBA has proposed to Metro Vancouver to build a new exit to the powerlines at the bottom of Corkscrew – we are hopeful for approval as the exit down Incline is in an irreparable and unsustainable state.