On June 5th & 6th, Wade Simmons and Richie Schley invited the NSMBA to join them at the Richie Schley Adventure Camp at Whistler Bike Park.

First tip Richie gave to NSMBA Pres Mathew Bond: “Don’t put your goggles there, your breath’s going to fog them up!”

No matter how good you are, unless you’re a top level pro yourself, showing up in countless videos, you could most likely learn a thing or two from two of the most legendary Freeriders in the world.

Richie & Wade began the first day walking us through suspension set up and cockpit position of levers/shifter.  The amount of experience both of these riders have they imparted lots of little insights.  Soon after, they spoke to us about proper technique on turning and had everyone run through the tight berms in the skills area to work on the fundaments in practice.  Weight, unweight, lean and push.  As each of us in turn made our way through the series of turns, Wade & Richie took each rider aside and gave specific instruction and broke down our little mistakes and habits.  It was really amazing to watch people immediately improve the very next run through the turns.  Onto braking next, Wade took us through proper braking techniques, focusing on modulation and stressing not to lock up your wheels. 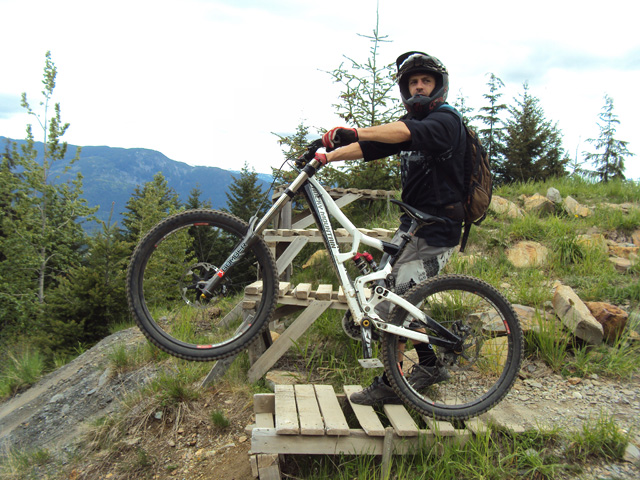 Keep your front wheel up!

After walking through the basics, it was time to go for a run down B Line where we could work on our turns and start getting some non-consequential air.  Richie led the group and Wade tailed each rider, stopping periodically to give specifics for improvement.  It was as much about getting coaching as it was about doing some good riding with two of the best in the business.  Although many of the riders looked stiff in the morning, they were beginning to loosen up in the afternoon, pushing into berms and even getting some air on Crank It Up.  It was fun tailing Wade watching him manual down the trannies and S turn the berms. 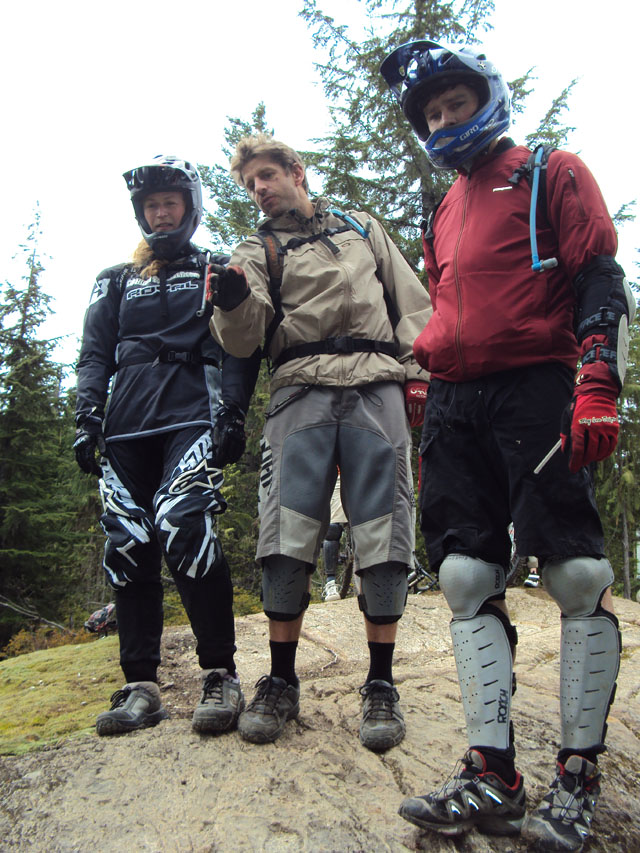 Just pop your bike there and nose manual down the face!

On the second day, we started by reviewing the basic fundaments of the first day and upped the ante by focusing on jumps, drops and steep rock faces for the day.  Both Wade & Richie walked us through the steps and before long, everyone was catching air at the Joyride skills park!  Some even hit the big drop which I would have never guessed judging them from the first morning.  It’s amazing the confidence Wade & Richie instilled in these riders.  Our final exercise was to learn to modulate our braking down steep rock faces.  On the upper Joyride rock faces, to my utter surprise, they managed to get every rider down in one piece!  By now, the confidence of the riders was soaring!  For the rest of the afternoon, everyone worked on their jumping and turning on Crank it Up with Richie and Wade giving more tips and corrections along the way.

I asked Richie if he was able to elevate the skill at his camps for expert riders.  After watching Richie table top jumps and Wade throw no handers on ALine, I thought the potential was huge to elevate even the top end riders.  Richie told me he always teaches to the level of the attendees, often breaking them into sub groups.  As most riders in this group were on the same level, there was no need to break them into groups. But yes, for those elite level riders wanting to learn to whip, table, throw no handers or whatever you like, Ritchie has coached the gamut of riders. 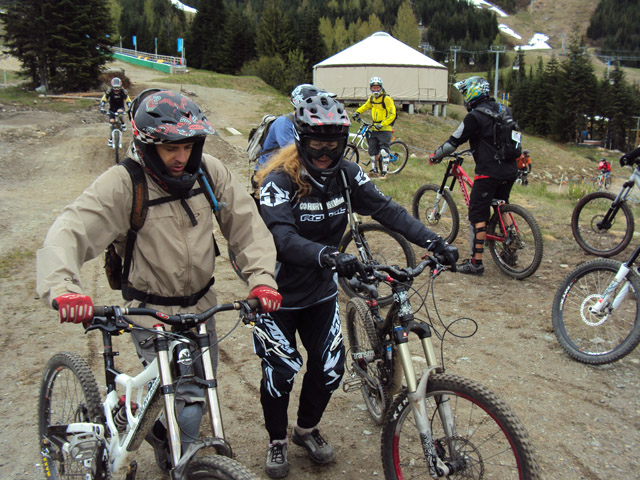 Wade was patient and spent time with everyone in the group.

The value of the camp was impressive considering lunch was included at the GLC both days as well as lift tickets for an additional option.  For any rider of any level interested in bringing up their skills, both Wade & Richie are a wealth of knowledge.  Not only did everyone learn something, it was also great spending time with both riders as they told stories of making videos and travelling the globe with other pros.  Despite their top level status, they were both really down to earth and patient.

If you want to bring your game up, you’ve got three dates left to do it:

Plus, Richie is available for private lessons.

Thank you to Richie, Wade and the Whistler Bike Park!