Mike Mayers from Metro Vancouver explains the magnitude of the rock slide.
The Shore is reeling from the major rock slide that occurred in the Seymour River at 5:30am on December 7th.  As we come to terms with the magnitude of the impact it is becoming apparent there will be no quick fix, and as of yet, no clear path ahead for a long-term solution. Metro Vancouver is engaging user group representatives in order to understand the impact it will have on the greater recreational community. This December 19th, Metro held a briefing for recreational user groups including paddlers, runners & mountain bikers.
“It is the equivalent of 500 dump truck loads of material,” explains Mike Mayers, Metro Vancouver's superintendent of environmental management. The message is clear. The slide is massive and has changed the dynamic of the river for evermore. “We are still very much dealing with this incident.” Although there is not much good news, the slide has stabilized. Blasting however, is not an option. Explosives could further destabilize the steep canyon surrounding the slide.  Expanding grout is an option to break up the house sized rock slabs, but even so, there is a new major river bed gradient to overcome (approx 50%) and as of yet, there are only educated guesses as to how deep the debris sits. In other words, breaking the upper boulders could have little to no effect while risking further destabilization of the area.
“The next clear window of weather and the bridge will be removed.” Jesse Montgomery, LSCR Foreman has been monitoring flows continually since the incident. “Estimates are that the bridge needs to be raised 7 meters to handle the new expected water levels.” This would require a bridge 4 times the length, but there simply isn’t the real estate – the east bank has already been submerged with the new water levels. The bridge deck can be salvaged and will await future positioning if possible, but that is very much an unknown at this point.  Presently, the bridge is acting as a debris catch, a dangerous dynamic that will not only destroy the bridge but also magnifies the rising water levels during a high flow event.
Unquestionably, trail usage will change.  The NSMBA will be working with Metro Vancouver to seek solutions.  With heightened water levels and steep, rocky terrain, potential for new options is limited. Steep trail grades and a staircase that may be better described as a ladder, the alternate crossing downriver at the Baden Powell is less than ideal for bikers. There could be opportunity to re-align sections to lessen grade but steep terrain and water main infrastructure in the area will significantly limit options. With the closure of Bottletop, riders are using Ridge Runner to Mystery Creek as the logical out from the Ned’s zone.  Uphill usership from residents (dog walkers, hikers) is on the increase now that Fisherman’s to Twin Bridges is closed (from Mystery Creek) so this potential user conflict needs to be addressed.
Snow fencing has been erected at the top of Bottletop since the days immediately following the landslide.  Metro Vancouver temporarily posted employees at the trail head to prevent riders from reaching the now decommissioned section of Fisherman’s, where culverts have been removed and trees lay across the trail like matchsticks. However, they're now confident that this inconvenience will prevent future attempts to bypass the signs: “Anyone who finds themselves at the bottom of Bottletop will do so only once, and never again.”  The NSMBA asks our community to respect trail closures until solutions are achieved.  “Even a short term solution is looking at two to three years,” explains Mayers, “not good news, but we are facing a stark reality.”
The NSMBA will continue to be engaged with Metro Vancouver as we work collaboratively to seek solutions. 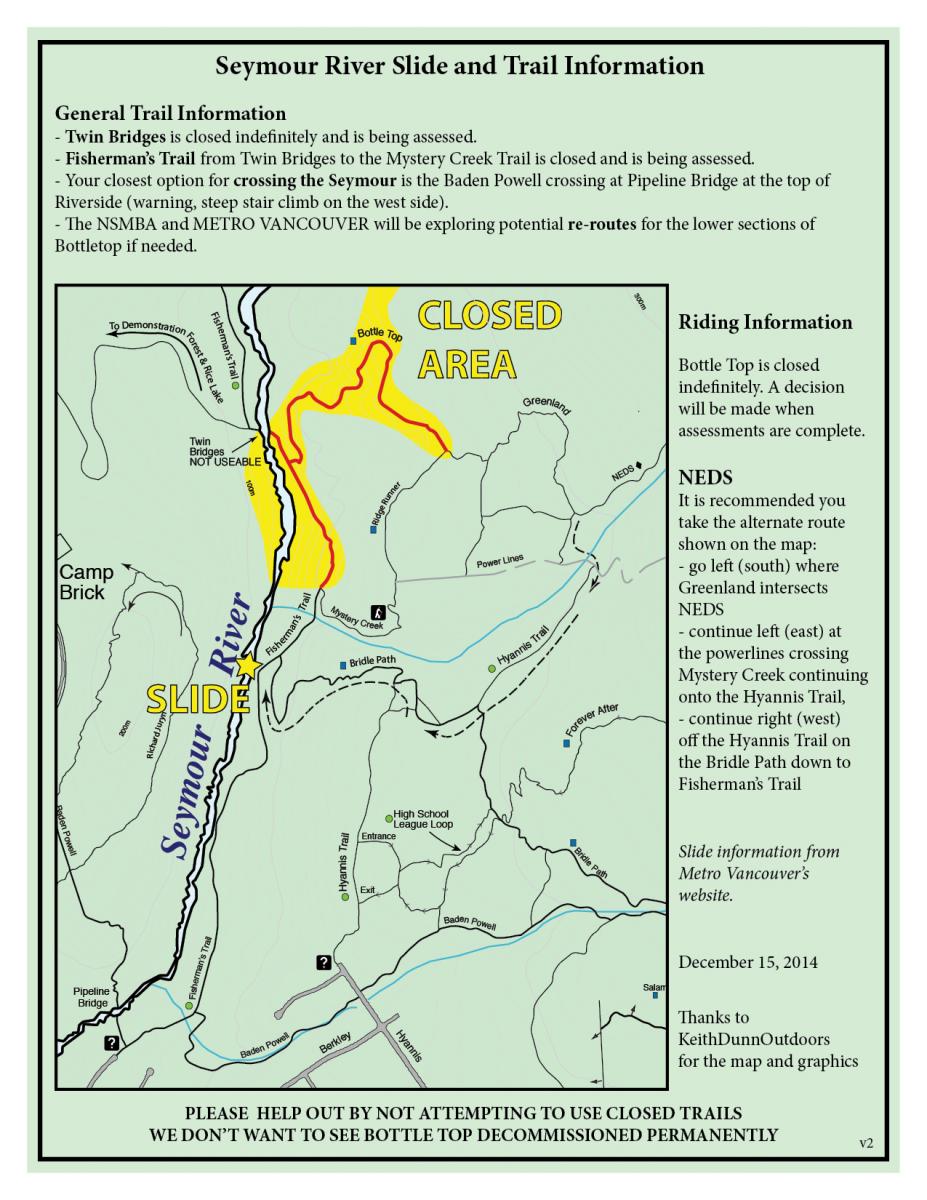