TAP 2015 is in full swing and work has begun on nearly 30 different trails on Fromme & Seymour.  With nearly 20 lead builders and 30 adopters, the program is stronger than ever.  As we catch up on deferred maintenance, the window of neglect is slowly closing giving us the opportunity to put the icing on the cake on many trails.  2015 is shaping up to be our best year yet!  Thank you to all of you who are part of the efforts.

Team Arc’teryx continue their improvements on Dreamweaver as part of TAP, now into year 4.

We are proud to announce that the Circuit 8 Restoration Project is finally complete after 5 years! Thank you, thank you, thank you to the Young Family Foundation and everybody who contributed to this project.New Pennzoil is complete thanks to CLIF bar’s public trail day in April.  This has been a two year project and great learning experience taken on by the Shore Corps. The DNV has designated the trail as bike only and will be the primary exit from the Dempsey area.  Please do not ride down the climbing trail to the Braemar tennis courts as it is uphill only for bike traffic. 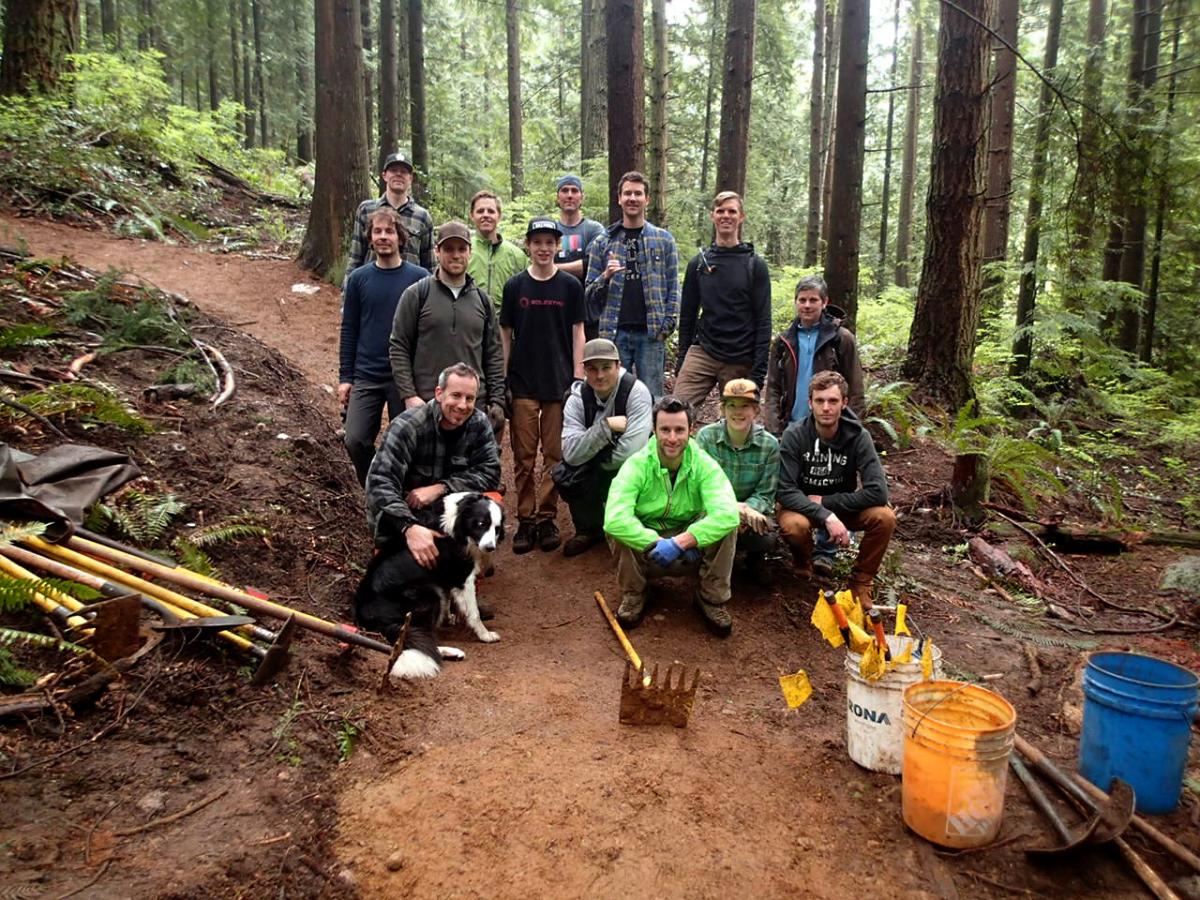 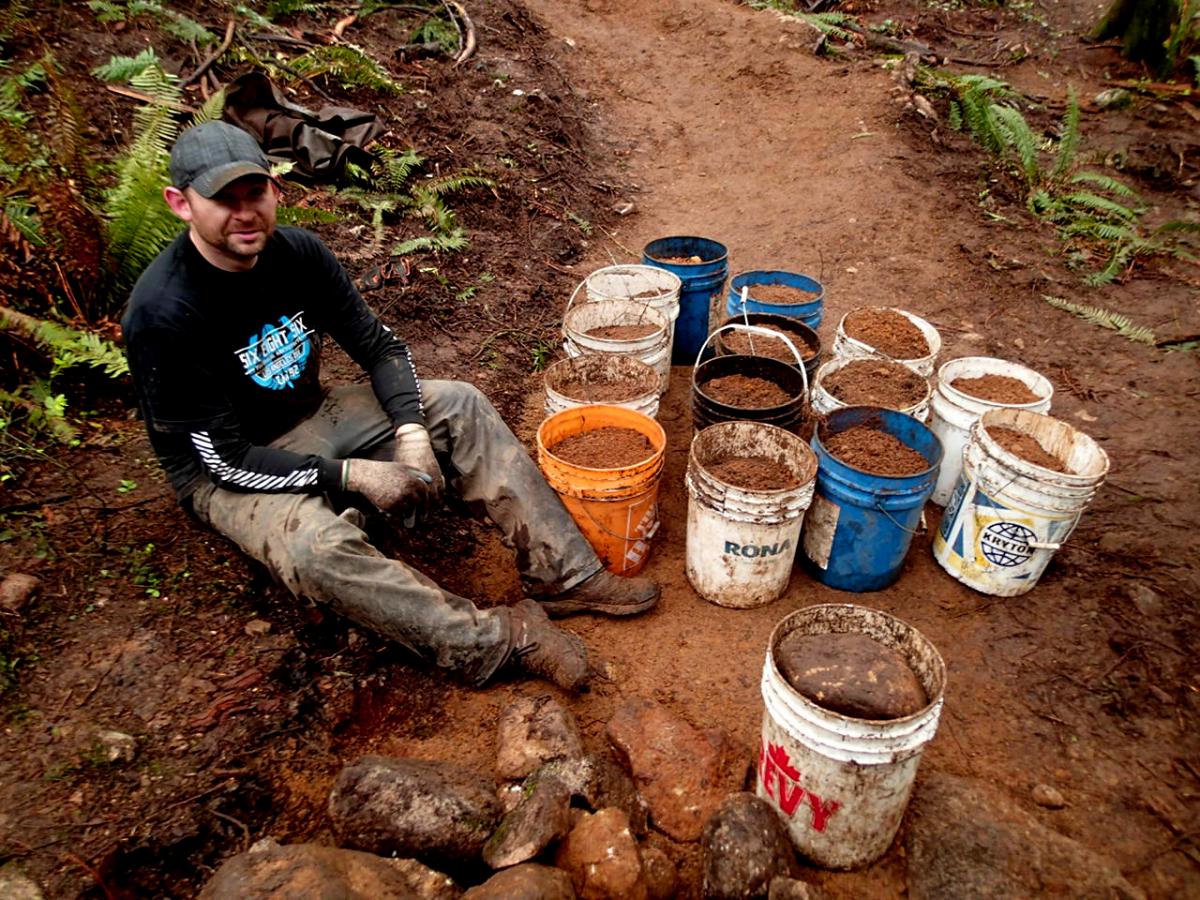 The Shore Corps was central to the creation of the New Pennzoil. Tom Hudson = dirt monger.

Thanks to Rocky Mountain Bicycles, improvements were made to the lower sections of Lower Oilcan, including the re-opening of the original line down the rockface which had been stacked closed with fallen trees over the past two winters.  The original line has been cut out and re-opened working with the DNV.  The new line that had been created has been shut down as it was becoming rather boggy in the wet.  LOC is coming back from the dead. 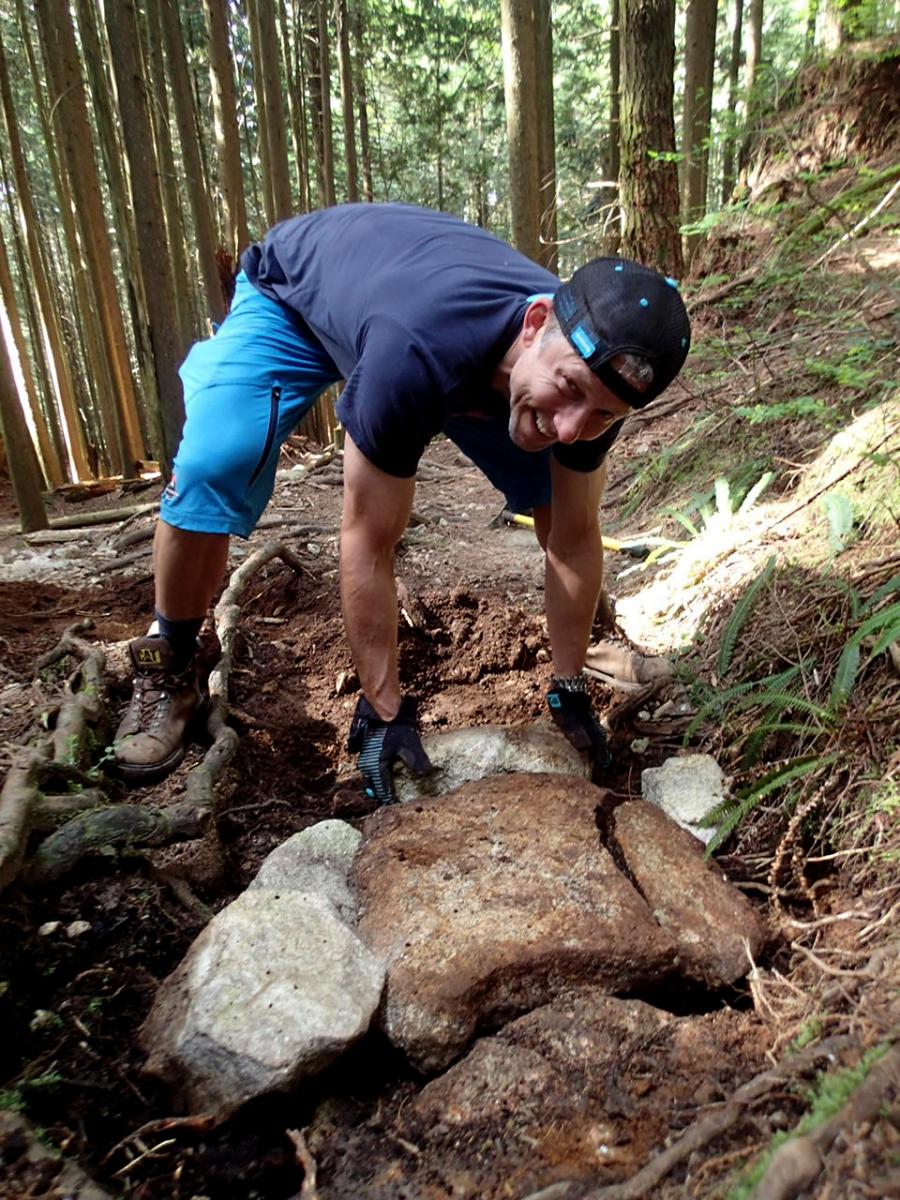 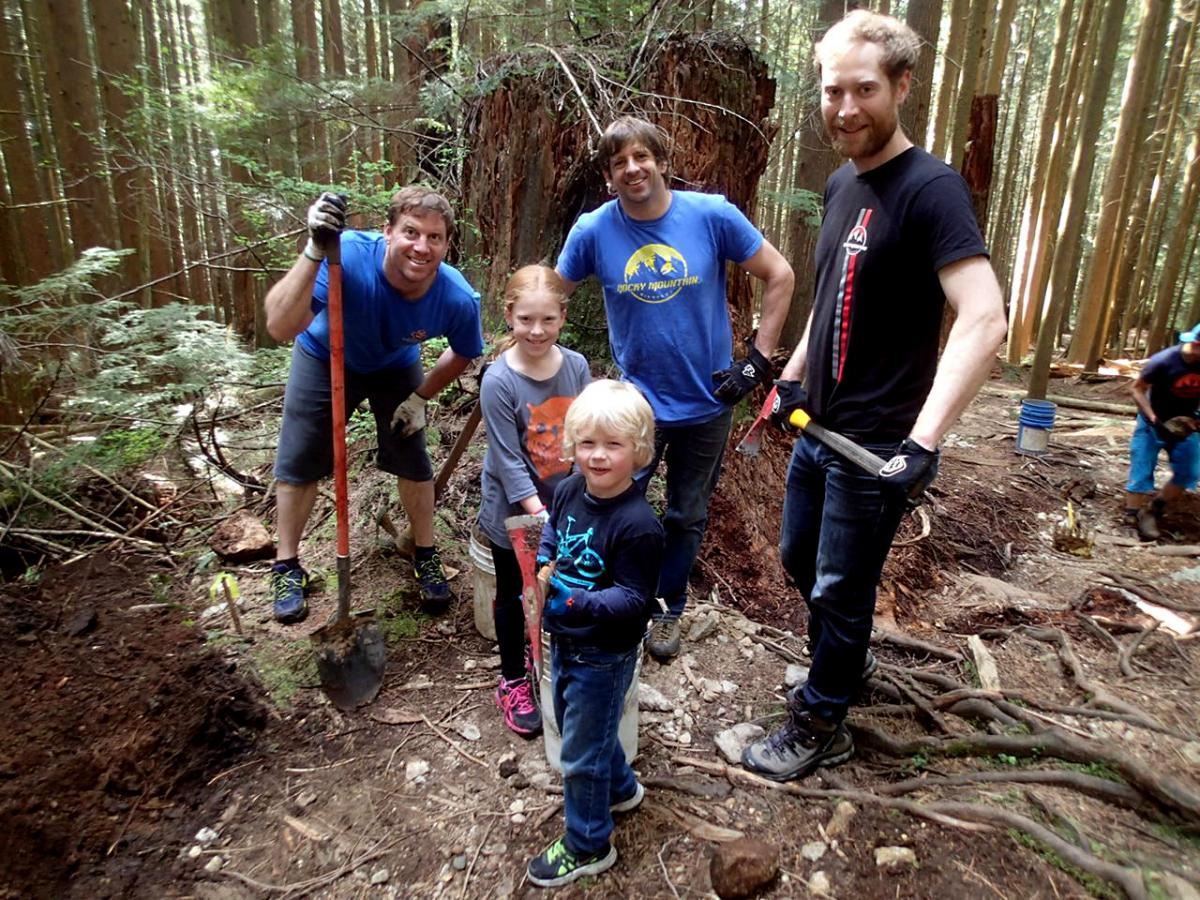 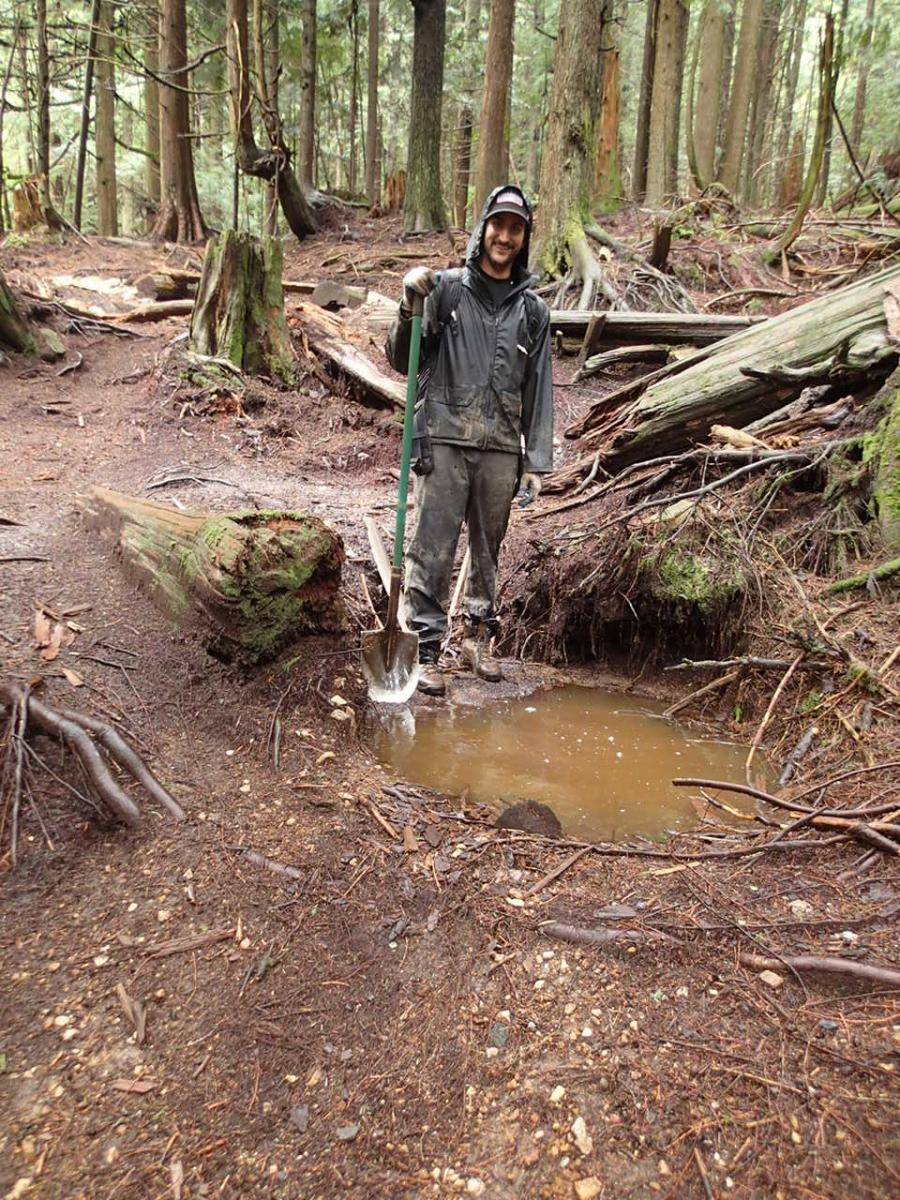 Great turn out on the April Trail day on Lower Oilcan.  Picture on right is the loam bog hole that was shut down when the original line re-opened.
LSCR Update as of May 13 7pm
Metro has confirmed machine work to commence to realign Upper Dales (west entrance). A walk thru with contractor, Metro & NSMBA to determine scope prior to work start date June 8.
Metro will be upgrading the trail from Mushroom Lot to Mystery Creek this summer (TBD) and stock piling rock at future bridge site on Cabin Trail.
Metro staff will be upgrading the trail from Seymour Mountain Road  up to bottom of CBC this fall (pinch flat alley). Work will involve replacement of collapsed drainage structures, ditching and re-surfacing. “On our way out we will incorporate some features into one side of the trail that might make the dull trip up or down more appealing  to some.” – Mike Mayers, LSCR Manager
If you want to contribute to the conversation, Metro can be reached at LSCR@metrovancouver.org.
If you haven’t had the chance to do the full run from 7th to Kirkford, do yourself the favour.  At 75, Ol’ Man Pete is going stronger than ever and has redefined this route.  DNV will be changing the rank of Kirkford to intermediate.
No Quarter,the Fromme Climbing Route (yes, named after the Zeppelin classic), is seeing some healthy usage.  Please keep in mind that there are some sections that are bi-directional.  Look ahead, stay in control whether riding up or down, and remember, courtesy has right of way. Please slow down or even stop to say hi to hikers, dog walkers and fellow riders.  We’re all in this together.
Work is presently underway on Lower Dreamweaver to make improvements to encourage this as the preferred descent below Skid Road. 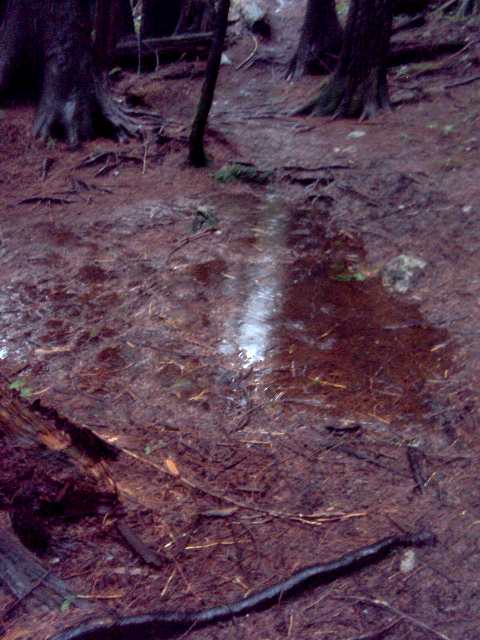 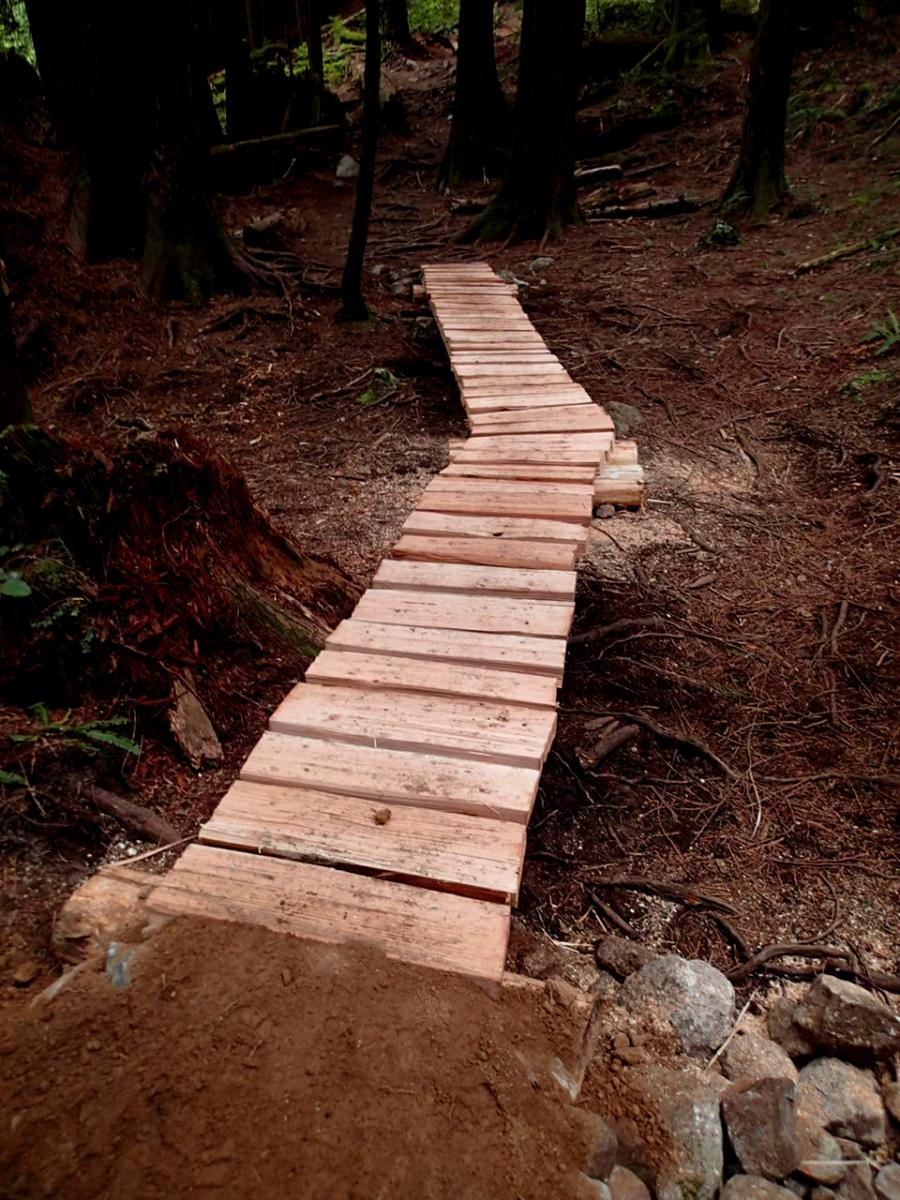 30 foot bridge to span wet zone on Lower Dreamweaver has been installed.

Lower Griffen Switchbacks-wood bridges are in poor condition and will be replaced over the next 4 weeks. 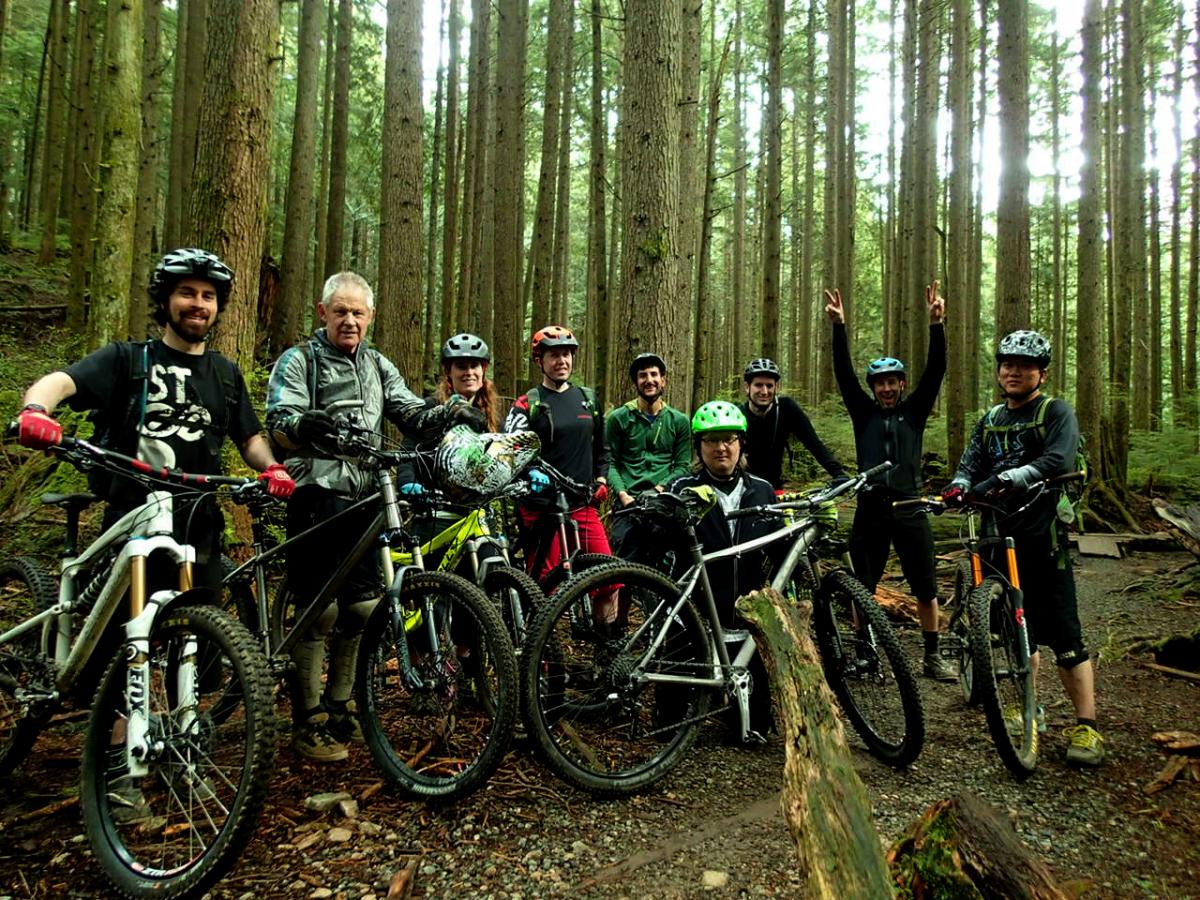 Some of our TAP builders on Fromme to sample the goods.

There is always plenty of work to take on and it’s also important our team of builder’s has the opportunity for some R & R.  Our TAP Leader social outing in April started with a ride on Fromme, followed by a field trip to   Central City Brewery & Distillery in Surrey. A big thanks to Central City Brewing, a TAP sponsor, for hosting our team outing for a tour of the Brewery & Distillery in Surrey with some sweet sampling to finish the day! 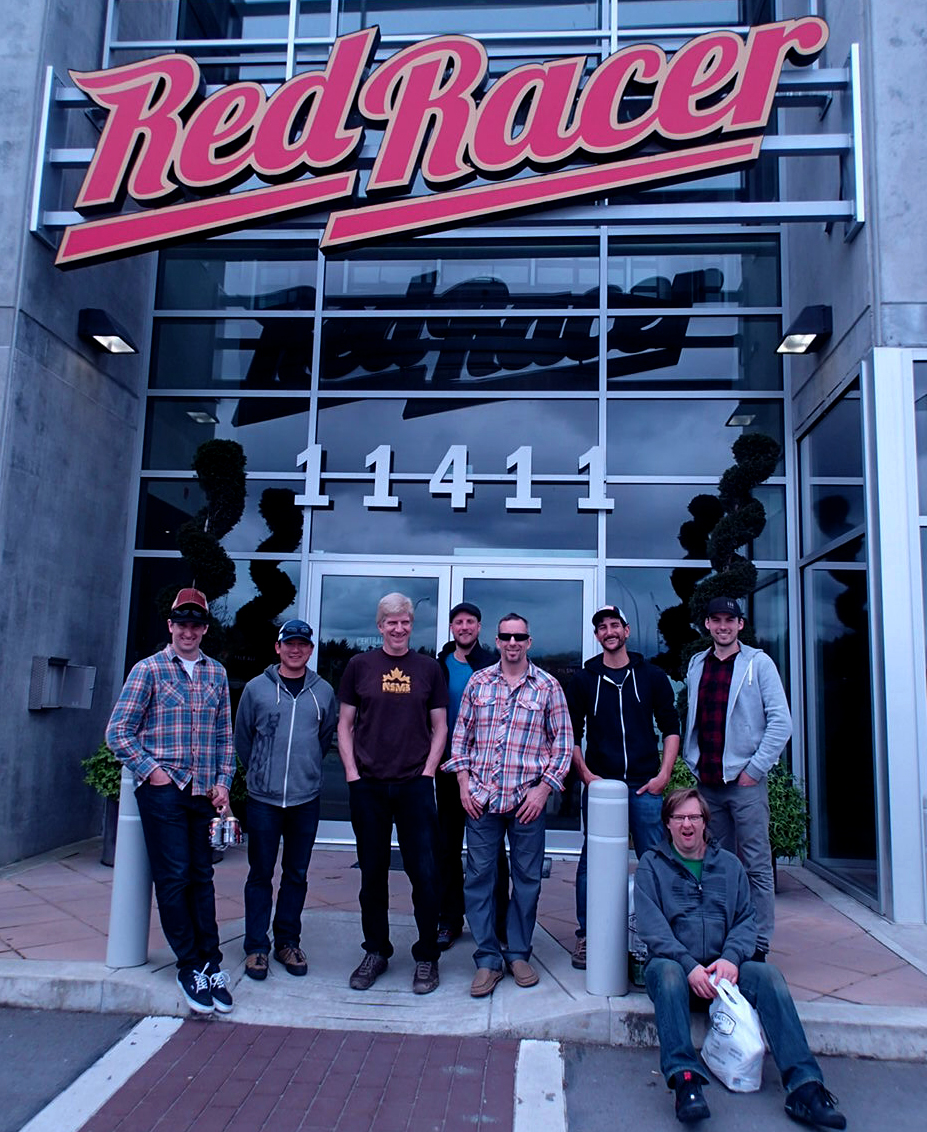 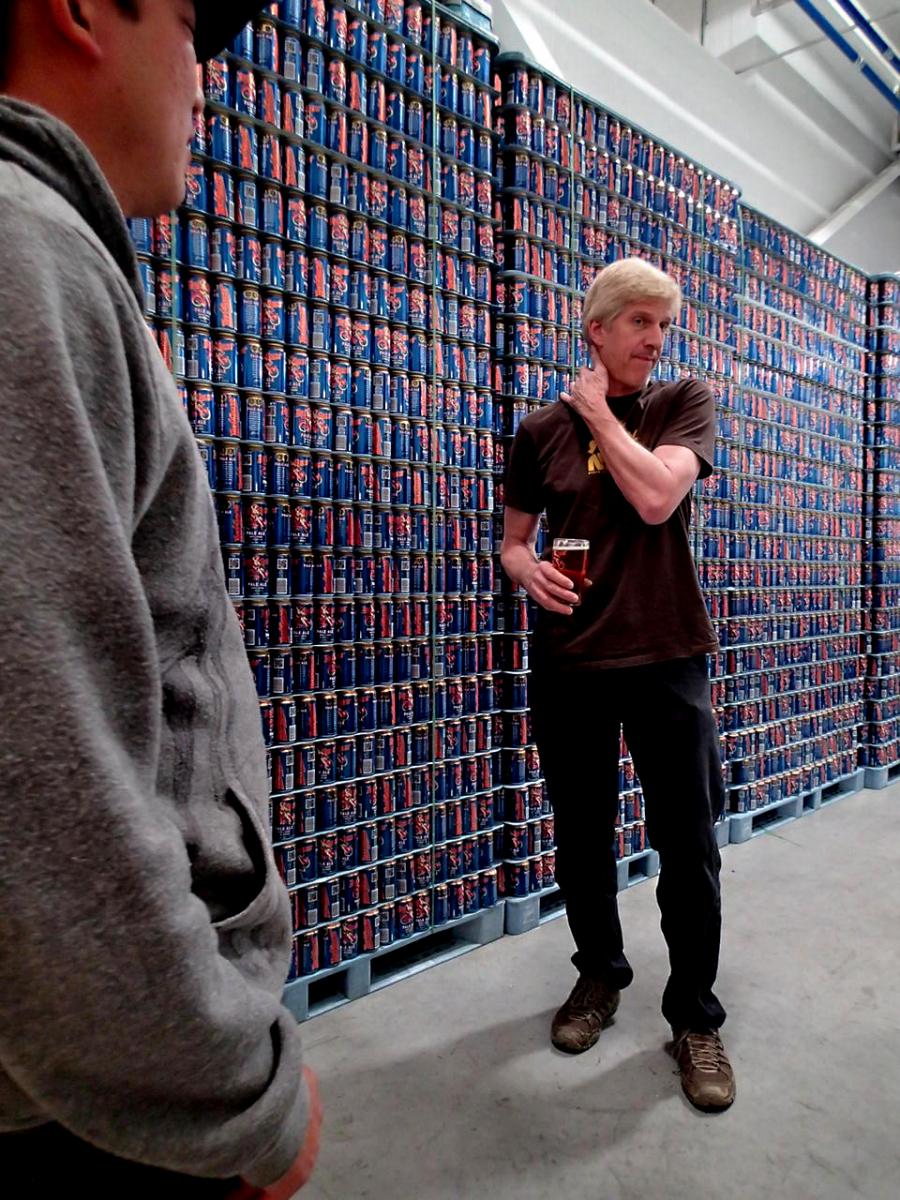 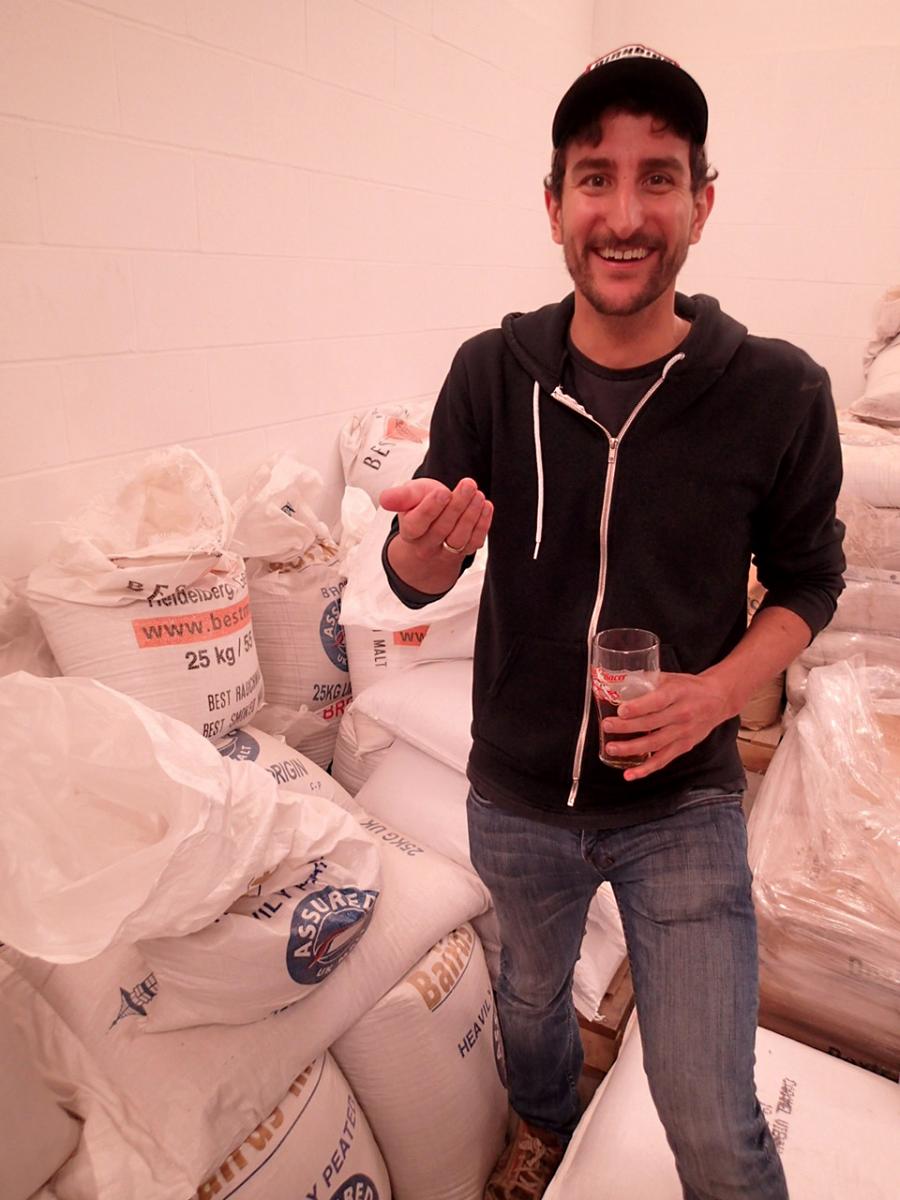 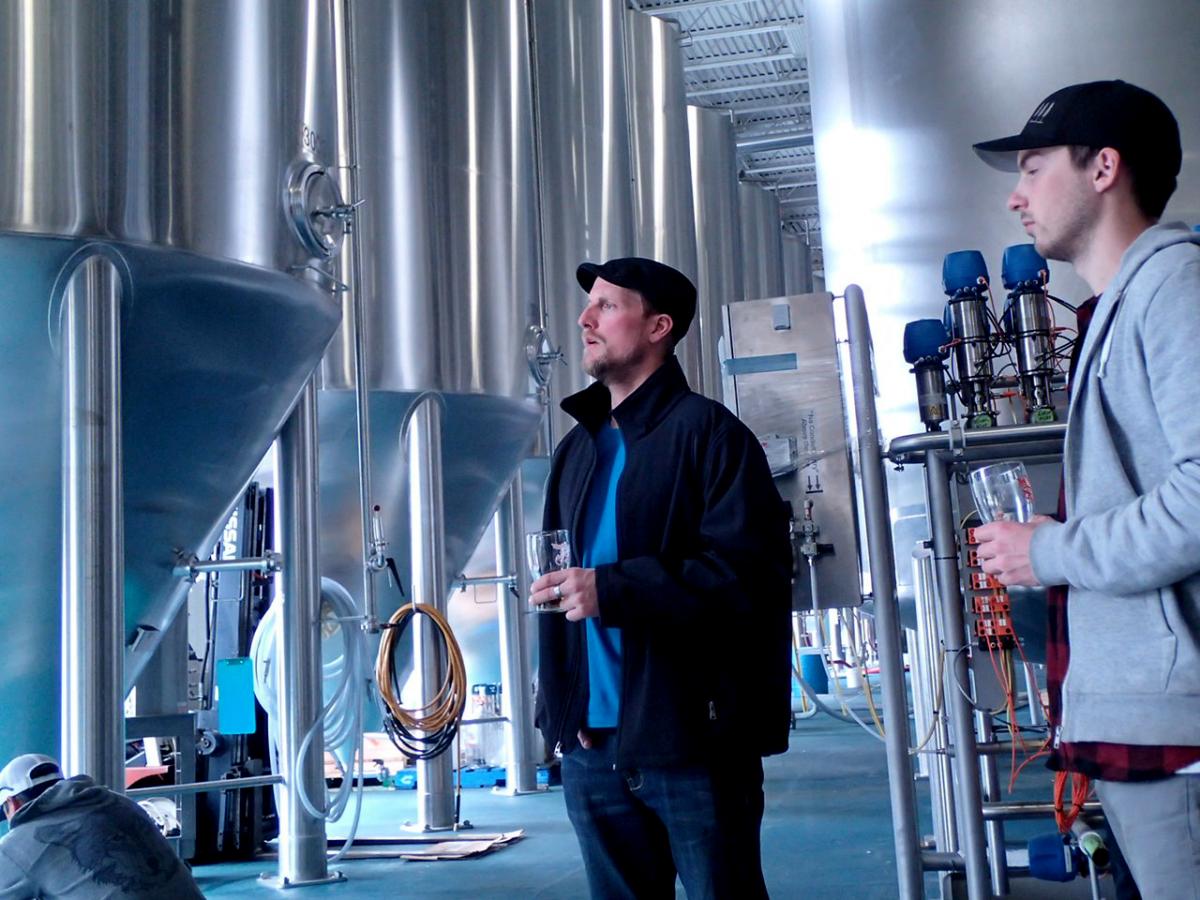