Massive efforts by Bank of Montreal over two successive trail days sees the formalizing of two significant reroutes and several improvements to the sustainability of Corkscrew trail on Seymour Mountain. 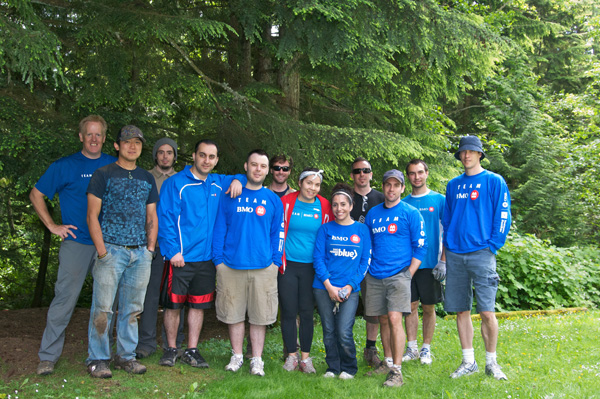 This is the inaugural year of the NSMBA Trail Adoption Program and BMO is the only non-mountain biking organization out of the 7 Adopters to participate!   We have organized 4 productive trail maintenance days this summer, where BMO employees have worked along side community members and an NSMBA Trail Maintainer  to repair “Corkscrew”, one of North Vancouver’s most popular mountain biking trails.  We hope to build on this momentum with 2 more trail days in the fall and hopefully similar activities next summer.

Thanks to all that came out to support BMO Trail Daze working with the North Shore Mountain Biking Association (NSMBA).  We had another rewarding day on the trails of North Vancouver with 15 people from BMO and the community working together and getting dirty!  As the pictures show, it was a ton of hard work but the immediate impact to the community was apparent with multiple groups of trail users thanking BMO for supporting such a great cause.

NSMBA works closely with the land managers (Metro Vancouver, BC Parks & District of North Vancouver) to ensure the trails are maintained and open for all residents of the Lower Mainland.  Mark Wood,  NSMBA TAP Director , has been extremely happy with the support BMO has provided both with the quantity and quality of work on the trail.

Keep a look out for our next trail day sometime in late September! 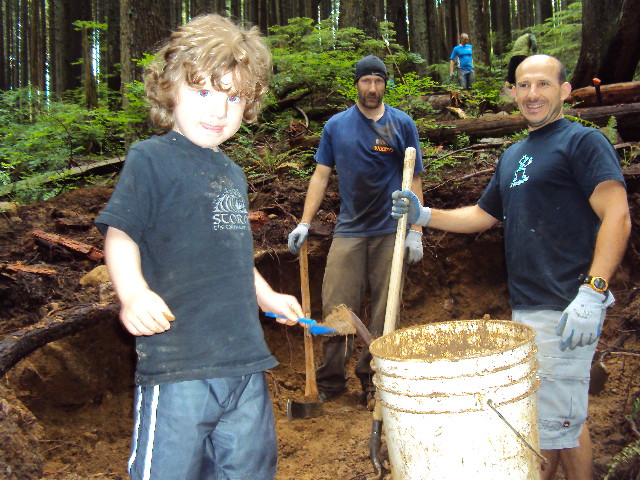 Everyone was pitching in! 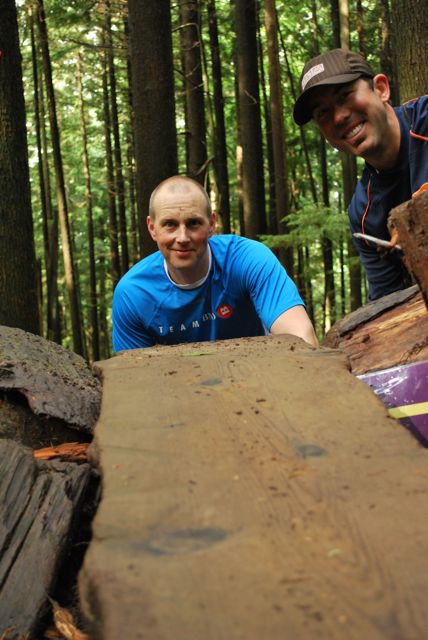 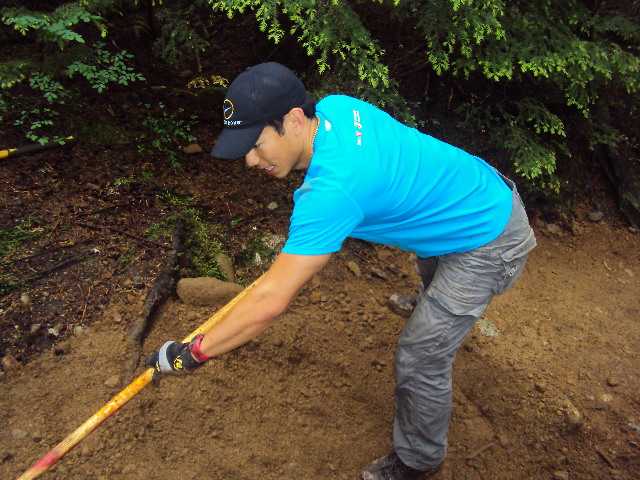 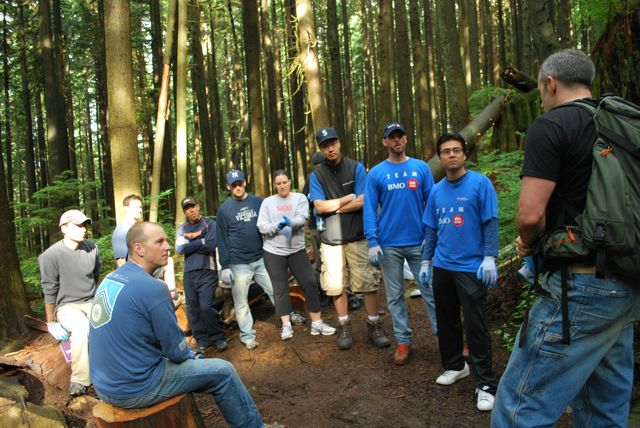 Morning debriefing.  Create a plan, be safe, have fun and look before you swing! 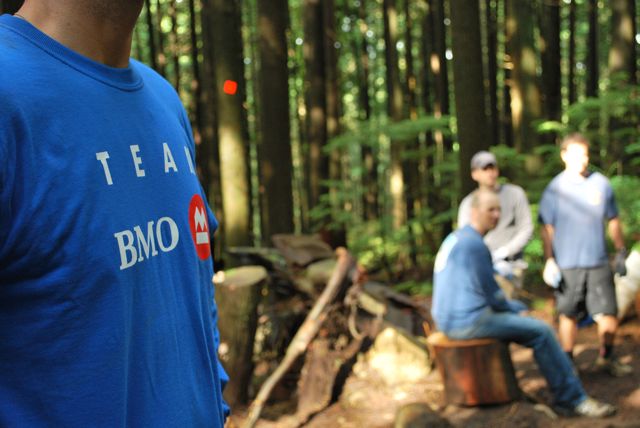 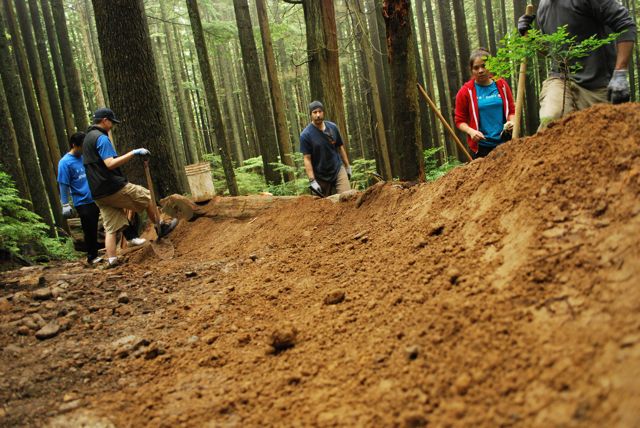 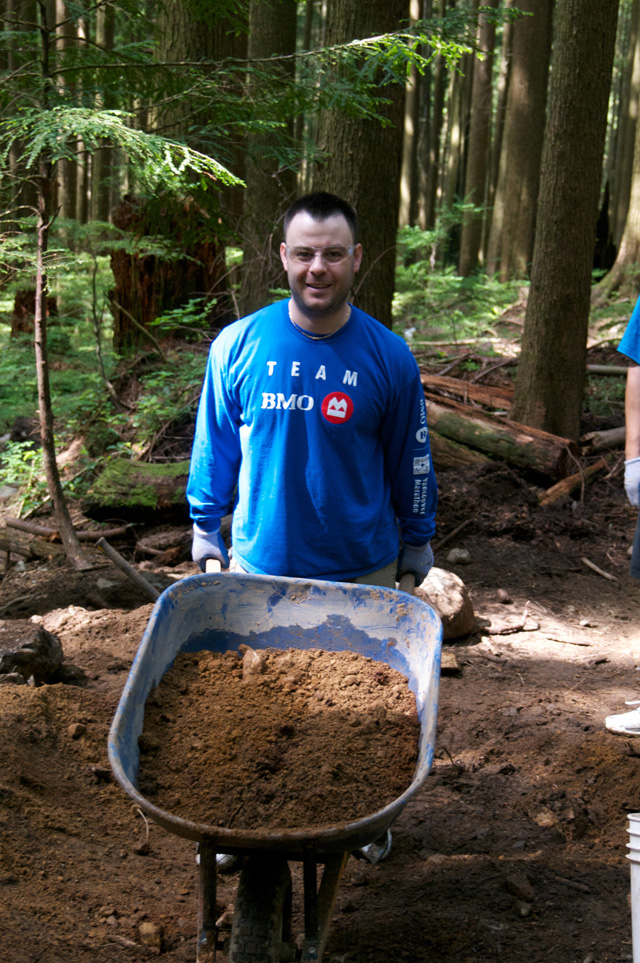 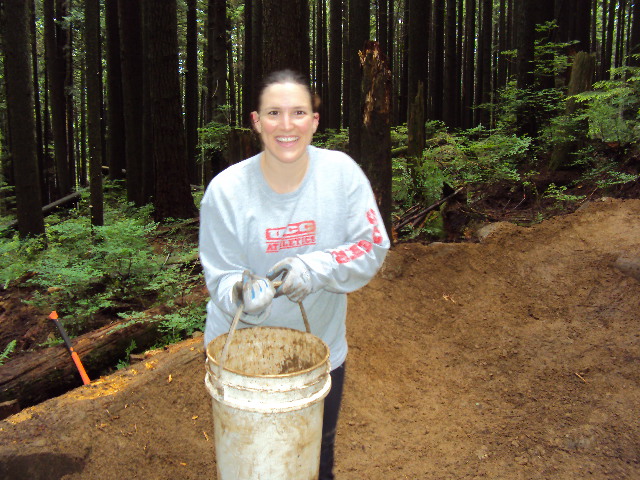 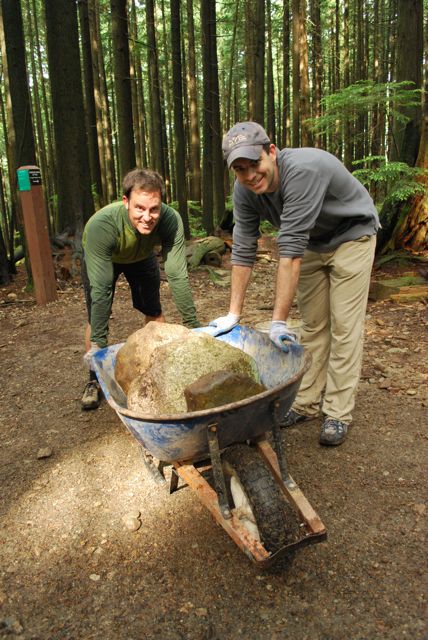 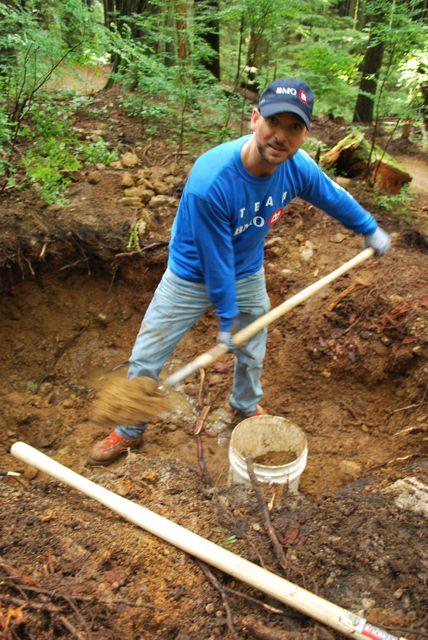 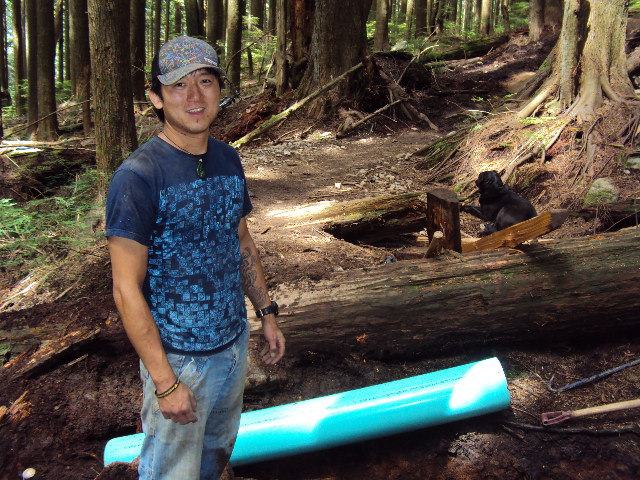 Before & after pics of the culvert project. 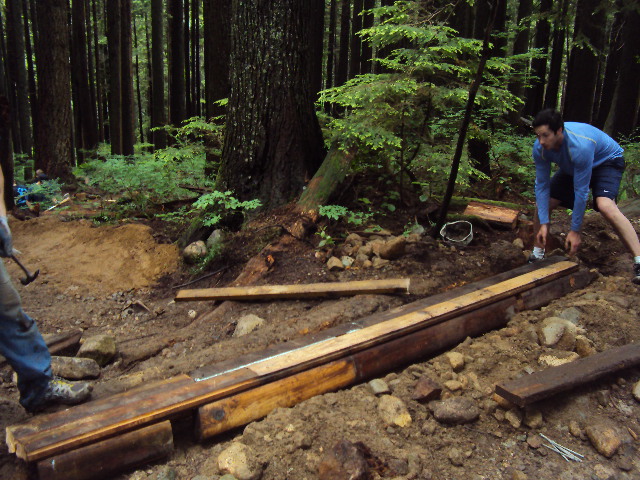 Burying a culvert for water diversion.

Before & after pics of eroded section.  A buried log channelled run off into a concentrated area.  Log was removed, area graded & ditched as well as a culvert added above this section to divert flow (see above photo).

Eroded banked corner on left.  Revitalized on right with new gold and water dispersion in place to ensure it stays there! 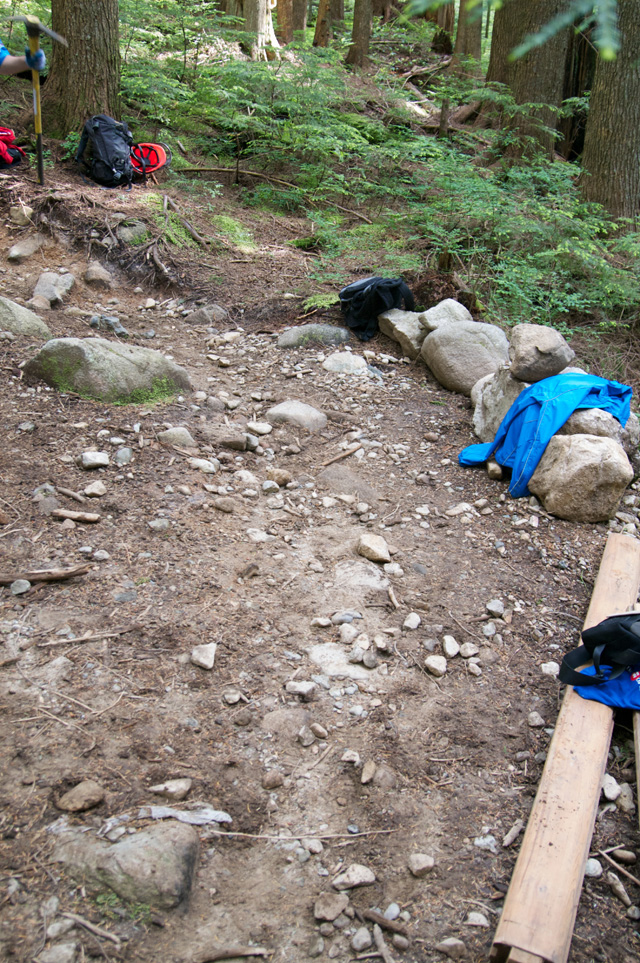 Before-this is where the new entrance to the first reroute is to be formalized. 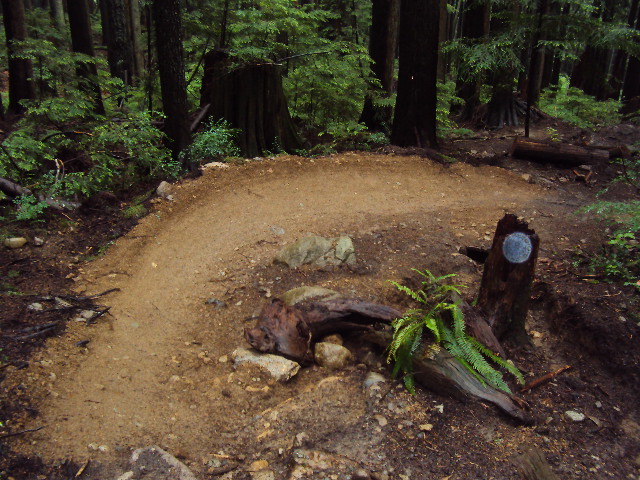 After-The new banked turn has ditching and a culvert for water to flow away from the trail.  The improvements are obvious when compared to the preceeding photo.  This formalizes the entrance to the first reroute.  The old section lies in the upper right, just beyond the log. 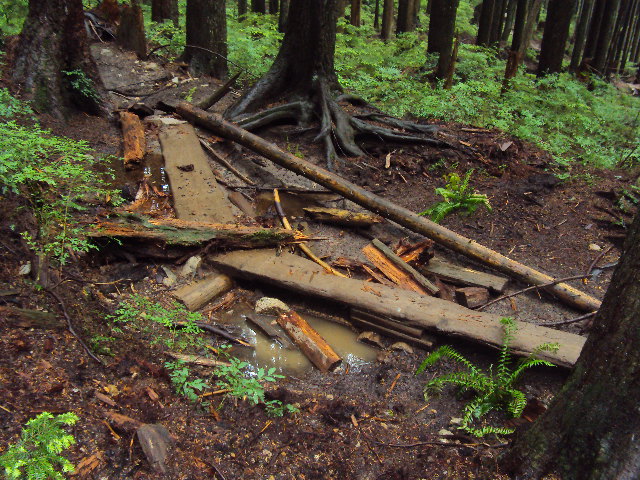 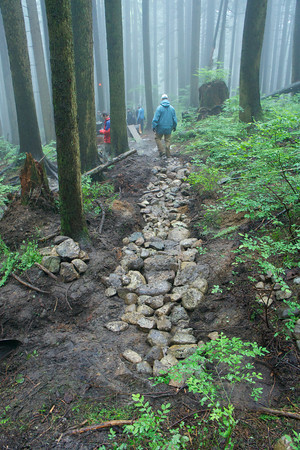 Laying a trail bed for the new reroute. 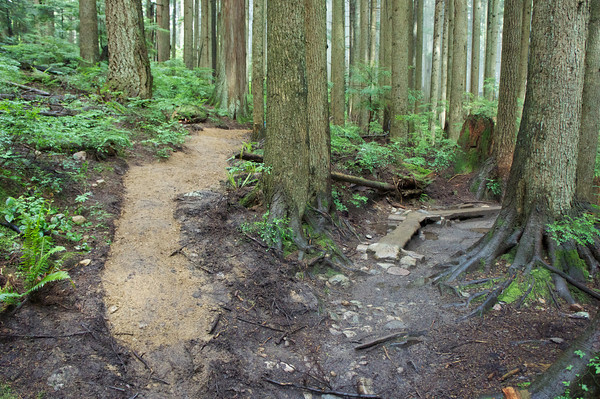 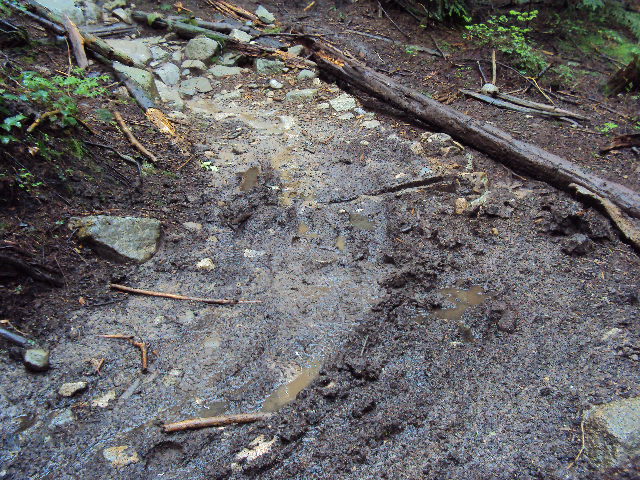 Decommissioned section.  Poor drainage came from poor alignment.  There is a point where the effort to alleviate an issue like this can be futile. 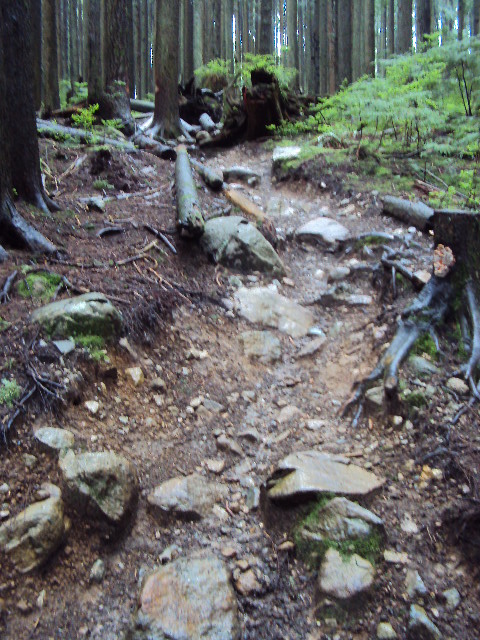 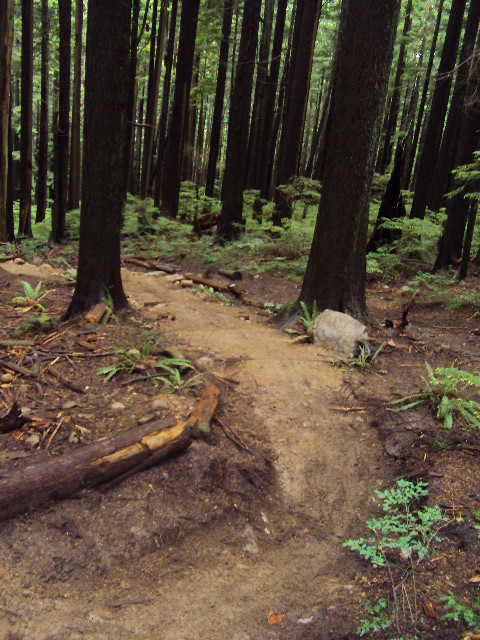 New section to replace the preceeding photo.  Better alignment and drainage to ensure water is dispersed. 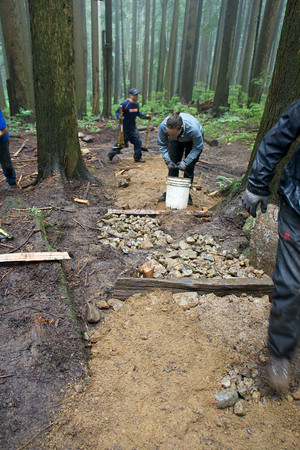 Putting a layer of rocks & dirt over the roots is an environmentally conscientious way to build trail. 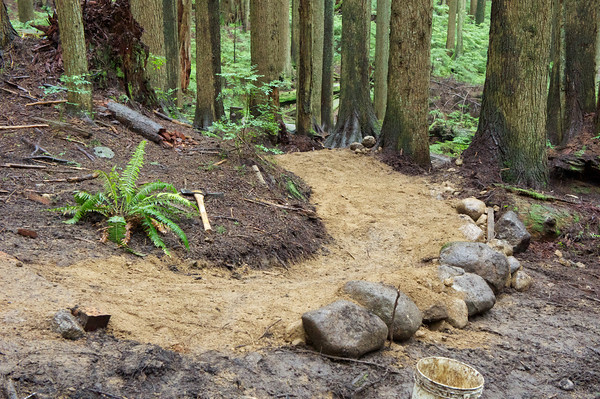 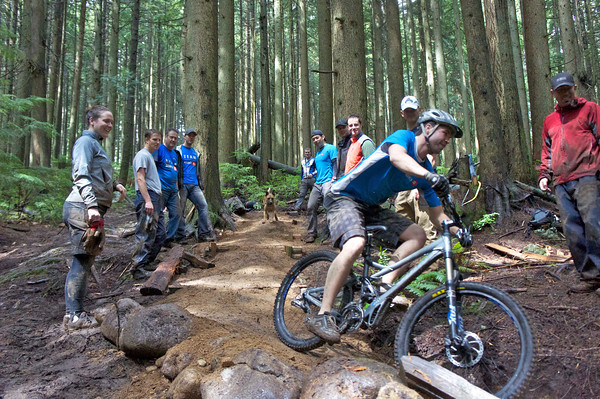 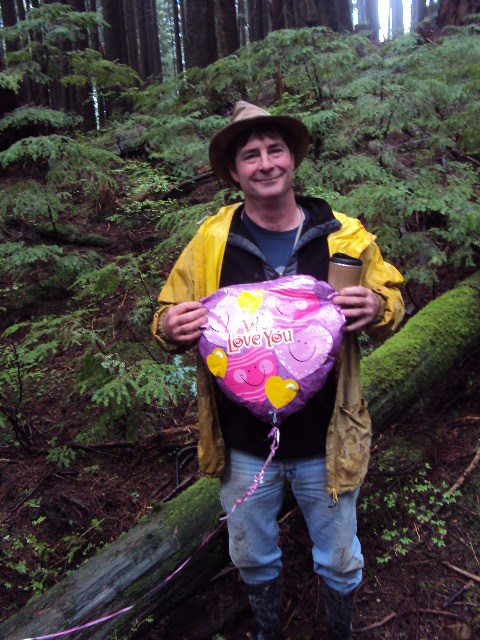