TAP is getting in stride!

Things are chugging along nicely with the NSMBA Trail Adoption Plan. Work has been done quietly in the woods over the past several months, one shovel full at a time.  As we work hard as a community to undue the hands of time and their heavy toll taken on our trails, things are getting better all the time, thanks to the many hands of the volunteers led by the NSMBA Trail Maintainers.

Working with the Landowners to ensure work is done to standard, a collaborative plan is first created, old rotting stunts  removed, sections of unsustainable trail rerouted, and rock and dirt are used to create grade reversal and water dispersion to increase sustainability.  With 2000mm of rain per year in our temperate rainforest, nothing is forever, but utilizing modern building techniques will increase the longevity of the improvements ensuring a sustainable solution that works.

Steed Cycles’ and Giant Bicycles’ have taken on the challenge of revitalizing one of the most technically challenging North Shore classics.  Their recent improvements on Boogieman under the guidance of TM Sean Gerke include a new platform ladder drop to replace the aging structure plus lots of ground work in rock and gold to undue erosion by rebuilding trail bed, transitions and improve flow.  Two successive trail days are already showing considerable improvements.  Thank you to Steed & Giant for playing their part in rebuilding the Shore. 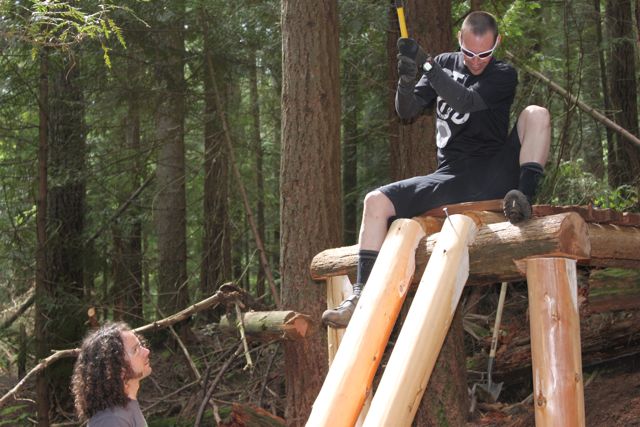 Kim Steed hammers in the new ladder bridge that has replaced the old, decaying structure.

The Mudbunnies and Ryder’s Eyewear are doing what many said couldn’t be done.  They are bringing Team Pangor back to life!  The amount of gold lain and structural improvements made after 4 trail days are nearly innumerable to mention.  Ditching & grade reversals have been implemented throughout, as well as a 140 foot reroute which oozes Feng Shui.  At least half the trail has been completed and it’s like night & day when you ride off the new and onto the old.  At this rate, they will have the trail completed by the end of the season, far beyond the greatest expectations.  Hats off to Chris Barker and Sven Luebke for leading the forces and thank you to Ryder's & the Mudbunnies for leading the charge in revitalizing the trails on Seymour. 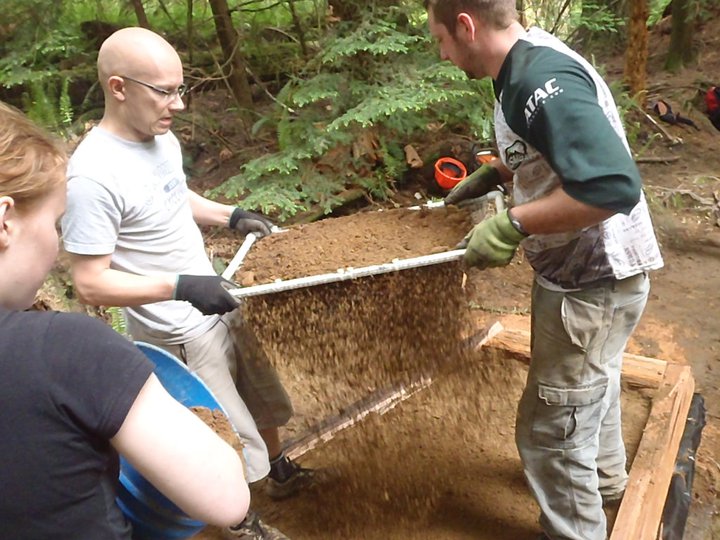 Corkscrew is one of the most heavily used trails on the Seymour mainline.  The trail needs significant help, but thankfully Bank of Montreal is more than up for the challenge.  BMO has done over 100 feet of reroute including whoops and banked corners with sound environmental application including cribbing over tree roots and naturalizing construction areas as well as decomissioned sections.  Eroded steps have been filled and the old lines (including the severely gouged trees) have been decommissioned.  The employees of BMO are putting a huge effort forth in the goal “to give back to the community.” 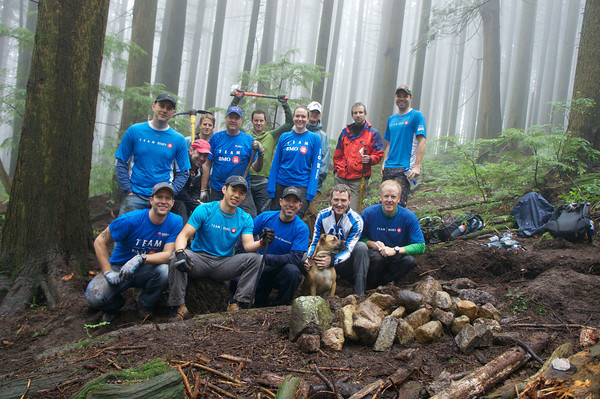 Bank of Montreal is working hard to give back to the riding community by rejuvenating Corkscrew.  Make no mistake, there are many riders on the BMO team!

Bottletop and Ridgerunner, led by co TMs Darryl Marlett and Daniel Lui, have received significant ground work restoration through the combined efforts of NSRide and Different Bikes.  The trails flow better than ever and grade reversals and outsloping ensure standing water is no longer an issue, thus creating a sustainable trail bed.  A new reroute on Bottletop has been slated for the fall, pending final approval by Metro Vancouver.  Thank you to Different Bikes & NS Ride for giving back and contributing to the greater good! 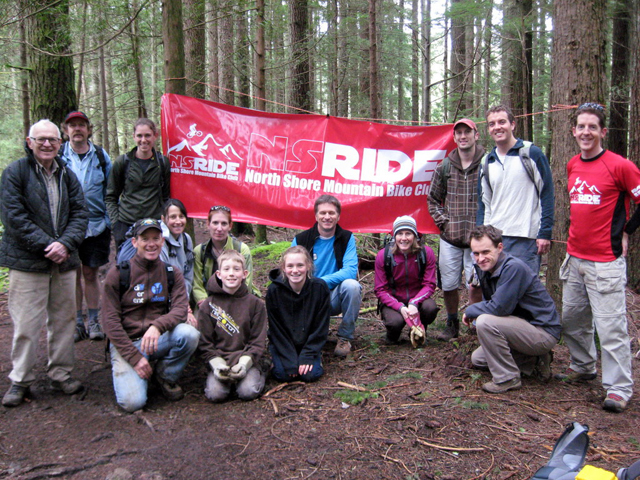 On Dale’s Trail, NSMB & SRAM under the austere eyes of Jerry Willows and Todd “Digger” Fiander as co TMs, are revitalizing one of the Shore's classics.  A new 70 ft swamp bridge at the entrance was a massive undertaking and has now been completed.  Removal of rotted woodwork and decaying stuctures as well as some line recalibration have improved the rider experience significantly.  Future plans now focus on the massive rockface, the remaining rotted stuctures and the final descent to the powerline.  Thank you to NSMB and SRAM for carrying their weight as we work together to restore our classic trail network. 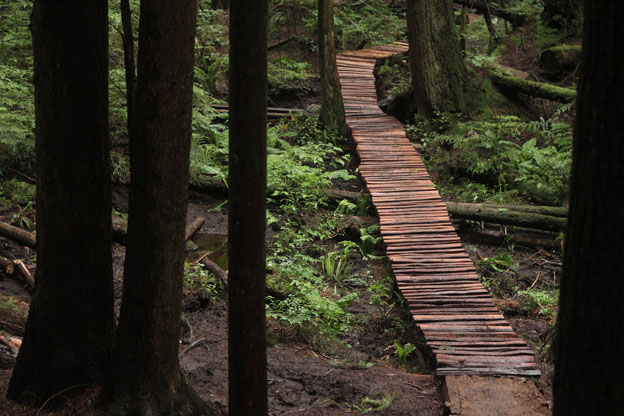 The new massive swamp bridge is a monumental work on Dale's and a vast improvement over the rotted bridge that served for so many years.

The John Thompson trail off Circuit 8 has received some serious improvements by Rocky Mountain Bicycles under  Trail Maintainer Matt Preston.  Significant drainage issues have been rectified and low lying swampy areas have been bridged in cedar.  The trail bed has never been so sustainable as one of the few XC realms on the Shore is receiving some much needed improvements with the strong support of Metro Vancouver.  Thank you to Rocky Mountain Bicycles who want to make the trails better for all! 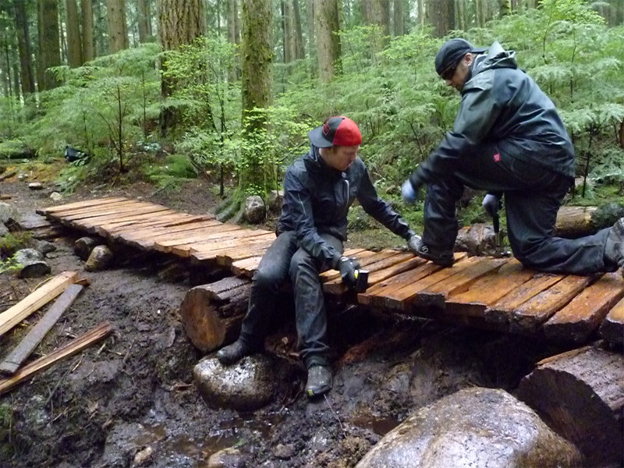 The NSMBA is proud to announce that MEC will begin work on TNT this month under the co leadership of Tyler Wilkes and Chris Barker.

As the season hits mid stride, more Adopters have approached the NSMBA to adopt a trail.  With a solid base of organization, balanced finances and a clear, collaborative vision shared with the strong alliance with the Landowners, the future holds great promise for TAP with expansion of trails on the near horizon.  If you or an organization you know of wishes to contribute to making things better for the community, please email TAP@nsmba.ca to be a part of more good things to come.  New trails to come in September 2011.