Digger.  The name is synonymous with the North Shore trails, not least because Todd “Digger” Fiander has been working on them for over 3 decades.  In fact, as far back as the early ’70s, young Digger was toiling away on a brand new trail called “Baden Powell” with his cub scout group.  It ignited a passion that is still alive today, and visible in every trail the legend has touched.  A pioneer in North Shore riding from the days of rigid bikes to present day, Digger’s trail building progressed through various iterations, many of which are documented in his North Shore Extreme video series.  His classic Ladies Only trail celebrates it’s 25 birthday this year, while the rebuilt “Expresso” is consistently rated as one of the top mountain bike trails in the world according to Trailforks.  He’s inspired generations of riders of all abilities and his reputation extends globally within the biking community, resulting in him being inducted into the Mountain Bike Hall of Fame in 2015.
. 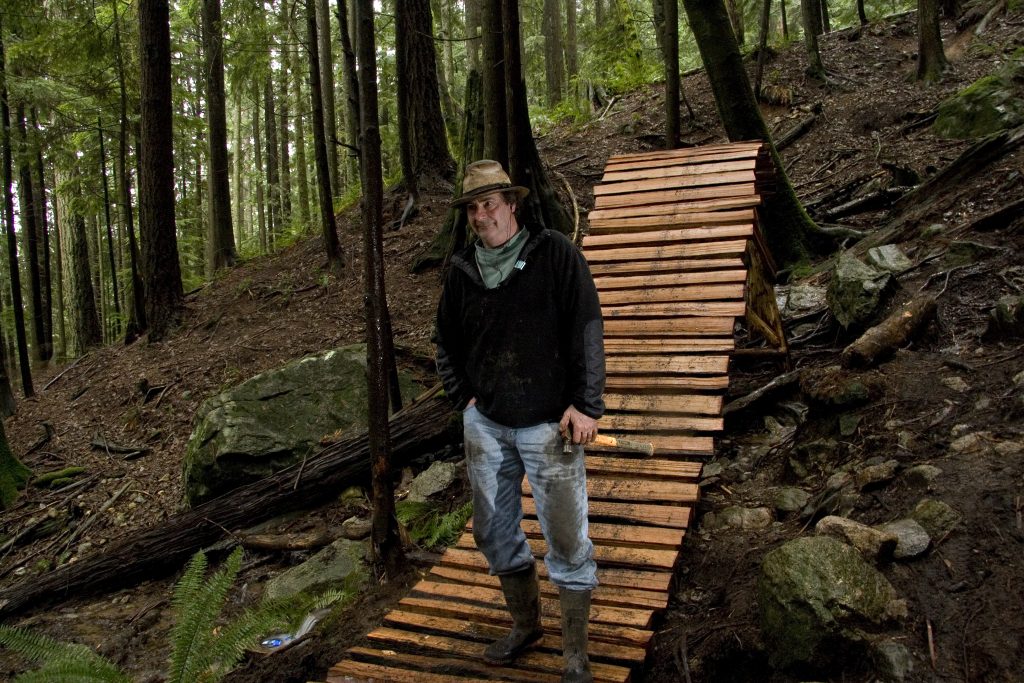 .
Despite this, Digger is one of the most humble, likeable guys you’ll ever meet.  With the growing popularity of the sport in recent years, riders are streaming down the North Shore trails on a sunny weekend and Digger will cheerfully greet every single one of them as they cruise by, offering words of encouragement or trail recommendations.
.
After providing so much support for others, Digger is in need of support himself.  He’ll be undergoing double knee surgery over the next year.  To ensure he has plenty of time to heal, and can focus on getting back on his feet (literally), the surrounding community has started a  “GoFundMe” campaign on his behalf.  Donors were so wildly generous in the first week that it hit the GoFundMe team radar and they donated $1,000!  The campaign is sitting around $30,000, but we’d like to keep the momentum going, so we’ll be sharing and checking on the campaign regulary and we encourage you to do the same!  We will also be creating opportunities for Digger to stay engaged during his convalescence, so keep checking back for further info.
.
Make a Donation to Digger NOW!